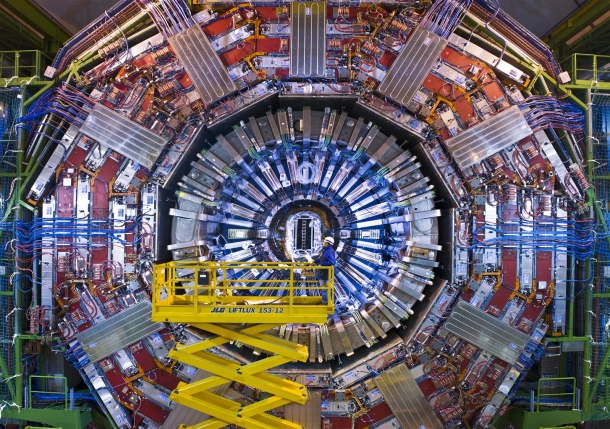 GENEVA--There are two kinds of physicists in the world, broadly speaking: those with the equation-covered blackboards, and those with the scales, thermometers, and pressure gauges.

The theoretical physicists have had the upper hand for years, but something new has begun tilting the balance toward the experimentalists: the Large Hadron Collider.

This mammoth, $8 billion particle accelerator is housed in a ring 27km in circumference bored about 100 meters beneath a somewhat pastoral valley west of Geneva and operated by a multinational nuclear physics organization called CERN, which was founded in 1954.

The LHC is now speeding protons nearly to the velocity of light and smashing them into each other. Thousands of researchers involved with the LHC's experiments hope to distill the secrets of the universe from the results: everything from Higgs bosons and quark-gluon plasma to supersymmetry and dark matter.

Despite serious setbacks in the LHC's early operation, and even though it's still only running at half the energy level planned, there is a swell of optimism as the accelerator operators iron out its wrinkles and the data starts pouring in.

"The LHC is positioned so that we're almost guaranteed to get something new out of it," said Tom LeCompte, physics coordinator for one of the major LHC experiments, ATLAS, and scientists have begun preparing papers based on some early results.

And with experimental data now arriving, it's time to start giving the theoreticians new food for thought.

"The data side has not spoken for a long time," said Guy Wilkinson, physics coordinator for another experiment, LHCb. "There are lots of ideas floating around but nothing to tether them to."

Looking Back in Time

The LHC is a time machine. It's designed to look back at the earliest moments of the universe.

During the Big Bang, the amount of energy in a given volume was colossal, but the neighborhood has been going downhill as the universe expanded over time. The LHC attempts to reclaim a tiny bit of that lost glory.

To do so, it moves clumps of protons very fast in two beams that travel both directions around the ring. Today, each proton can reach an energy level of 3.5 tera-electron-volts, so, when two collide from opposite directions at carefully controlled points along the ring, they have a total energy of 7TeV.

When they collide, they make a mess.

Other particles cascade out from the impact, triggering detectors to pour data into computer storage systems. Further data processing lets the researchers reconstruct what happened--particles generated by the collision and more particles produced as short-lived progenitors decay.

With each new generation of particle accelerators, energy levels get closer to the Big Bang's conditions. Initial accelerators were called atom smashers, since they broke atoms into subatomic particles such as protons and neutrons. Now, with more energy on hand, subatomic particles are being smashed into even smaller bits--quarks, for example, three of which make up each proton and neutron, but also a lot more.

Energy levels diminished enough for atomic nuclei to form something like 3 minutes after the Big Bang. Individual protons and neutrons formed earlier--about a thousandth of a second afterward. Earlier accelerators, such as the 1 TeV Tevatron at Fermilab in Illinois, have been able to peer into this regime, and indeed that's where the last of the six varieties of quark, the top quark, was first observed in 1995.

The LHC should be able to peer yet earlier into the history of the universe by operating at yet higher energy--all the way back to the time of the quark-gluon plasma, when the universe was only a trillionth of a second old.

Wait, gluons? OK, this is where the particles start sounding more unfamiliar. Under quantum physics' "standard model," there is a sizable family of elementary particles. They include the six quarks, the lepton group that includes electrons and three varieties of neutrinos, and another group called the bosons.

Bosons include photons--light--and gluons, which effectively bind quarks together into protons and neutrons. Other varieties of bosons, the W and Z, were discovered in 1983 at an LHC predecessor at CERN.

Read the full article at CNET.