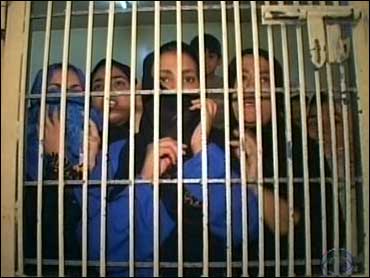 Imagine women in prison because their husbands are accused of terrorism. Now imagine their infants and children in prison with them. Worst of all, it seems they have no way out.

The women prisoners of Khadimiya jail had been waiting a long time for the chance to be heard, some shouting from behind bars:

"Our husbands were accused ... and we were arrested."

"Many of us have been raped."

"We were pregnant and lost our babies."

Almost 200 inmates live in the prison, many with their children. Some of the babies were born behind bars.

Most of the women are being held on vague terrorism charges, with little or no evidence and no hope of legal advice -- or even a court date.

"They accused my husband," one woman said. "Then arrested me too but I've done nothing!"

Another prisoner said through tears, "I was detained in the Green Zone by the Americans two years ago. I have no idea what's happened to my family."

With the cameras rolling, al Hashemi -- a smooth politician -- tried to reassure them.

"We'll appoint a committee to look into your cases," he told them.

But the women were having none of it.

Sitting cross-legged in her bunk, one replied, "I don't believe you. I've been waiting a year-and-a-half to find out why I am here."

And there were stories that al Hashemi would rather not have heard.

"I was raped after I was arrested," one woman claimed. "They have sentenced me to 20 years on terrorism charges."

Such a statement is taboo in a country where a women's honor is everything, and it makes the vice president squirm.

Al Hashemi told Palmer: "They try to talk openly but I just stopped them. It's damaging, in fact. Damaging. Damaging my personality being a vice president in fact that Iraqi women are treated like that."

When pressed, al Hashemi did confirm the women's accounts of abuse by police and interrogators -- long before they arrived in their overcrowded cells.

"This is the most critical area," he said. "Where the torturing, the rape, everything, all these bad experiences, fraud, malpractice is done at this stage."

Then they come to Khadimiya jail and wait for justice.

To the damaged and the despairing, it might as well be a life sentence.

The nun who became a trailblazer for girls sports