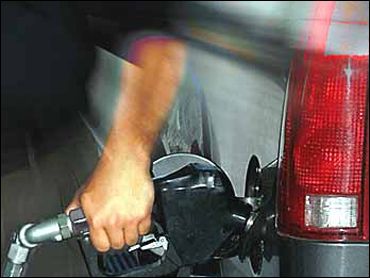 However, outside of food and energy, prices remained well behaved. The core inflation rate edged up by just 0.1 in July. This price category, which is closely watched by the Federal Reserve, was helped in July by a 1 percent drop in new car prices, the biggest decline since January 1975.

In another report, the Commerce Department said construction starts new homes and apartments fell a slight 0.1 percent in July, a possible sign that the red-hot housing market is beginning to cool off.

So far this year, inflation is rising at a moderate annual rate of 3.5 percent as the explosion in energy costs has not yet triggered underlying inflation pressures.

The core rate of inflation, excluding food and energy, is rising at an annual rate of just 2.2 percent so far this year.

But the soaring costs of fuel could have an adverse impact on the economy ultimately if consumers pressed by this higher expense cut back on their spending elsewhere.

The overall moderation in inflation pressures has allowed the Federal Reserve to keep pushing interest rates up gradually rather than being forced to switch to a more aggressive credit tightening. The Fed increased a key interest rate last week for a 10th time over the past 14 months. Economists expect more interest rate increases to follow.

The Commerce Department reported Thursday that total retail sales rose by 1.8 percent, the best showing in three months, but almost all of that strength came from auto sales, which soared by 6.7 percent. Excluding autos, retail sales were up a smaller 0.3 percent in July.

The Federal Reserve boosted interest rates for a 10th time earlier this week in an effort to slow the rebounding economy enough to keep inflation in check.