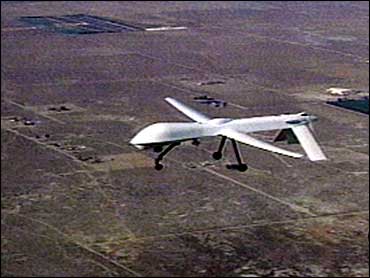 The Bush administration was advised in early 2001 by a holdover from the Clinton White House to use unmanned aircraft to target Osama bin Laden, but worries over missile technology and territorial wrangling between the CIA and Pentagon delayed the deployment until after the 2001 terrorist attacks.

The Clinton administration ordered the arming of the unmanned aircraft after the drones spotted someone resembling bin Laden in Afghanistan three times in the aftermath of the October 2000 attack on the USS Cole in Yemen.

Around Christmas 2000, the Clinton White House decided to forward the plan to kill bin Laden to the incoming Bush team rather than mount an attack during President Clinton's last days in office.

However, Mr. Bush's advisers did not agree on the outlines of a plan for going after the al Qaeda leader until just one week before the Sept. 11, 2002 terrorist attacks on Washington and New York, and the drones did not return to the skies until after the attack.

The delay in targeting bin Laden is revealed in the classified sections of a Congressional report on the terrorist attacks, obtained by the Associated Press. The dispute is expected to be examined by an independent commission appointed by the president and Congress, officials said.

Officials speaking on condition of anonymity said that within days of Mr. Bush taking office in January 2001, his top terrorism expert on the National Security Council, Richard Clarke, urged National Security Adviser Condoleezza Rice to resume the drone flights to track down bin Laden, citing the successes of late 2000.

The drones were one component of a broader plan that Clarke, a career government employee, had devised in the final days of the Clinton administration to go after al Qaeda after the October 2000 bombing of the USS Cole.

Hellfire missiles were attached to unarmed Predators after drones flown by the CIA from Uzbekistan to Afghanistan spotted a man that several U.S. intelligence analysts believed was bin Laden, or his trademark Japanese truck, as many as three times in September and October 2000, the officials said.

"Different people came to different conclusions. You couldn't see facial characteristics. But there were several who concluded it was bin Laden," one senior U.S. official said, explaining those assessments were based on size, clothing, a beard and human intelligence.

During the fall 2000 sightings, the United States was unable to launch a strike with submarine-based cruise missiles in time to kill bin Laden, officials said.

With powerful winter winds over the mountains affecting the drones' flights, the Predators were taken out of action in Afghanistan after October 2000 and retrofitted with weapons.

One was repaired after it crashed on landing, sparking debate whether CIA or the Pentagon would pay the damage. Officials said they planned to put the drones back into the air as early as March 2001 after the winds subsided.

The Predators, however, were not put back in the air before Sept. 11.

Officials said the delay was due in part to arming the Predator with enough lethal force and resolving the debate over which agency was legally and practically best equipped to carry out an attack.

By summer 2001, the Predator was armed for another test in the desert that destroyed a mock-up of a home bin Laden was suspected of using in Afghanistan, Clarke told executives in a recent speech at a technology conference.

Some U.S. officials, however, worried that an anti-tank missile with just a 27-pound warhead might not be powerful enough to kill everyone inside a building, and the military worked to modify the warhead to be more lethal, officials said.

Another official said the CIA was opposed in the interim to running too many unarmed Predator flights for fear that would lead Afghan and al Qaeda leaders to be on the lookout for the drones and to flee sites before bombs or missiles could be launched.

After Clarke's briefing in January, the drone plan was discussed again in late April by national security deputies and the test on the mock-up of bin Laden's home was conducted in July. A Bush administration official said Rice was generally supportive of the idea as part of a broader strategy.

At a White House meeting of Mr. Bush's national security principals on Sept. 4, 2001, senior officials discussed several ideas, including use of the drones, as they finalized a plan to accelerate efforts to go after al Qaeda amid signs of a growing threat of a domestic attack.

Though the CIA had operated the unmanned Predators in Afghanistan in 2000, director George Tenet expressed strong reservation about his agency running the armed drones for an attack mission, suggesting it was the purview of the military, according to officials who witnessed or were briefed about the meeting.

Defense officials suggested they be given an objective — kill bin Laden — and be left to make their own decisions about whether to use a drone or other weapons like cruise missiles and B-1 bombers, officials said.

Officials at the Sept. 4 meeting put off recommending the armed drone as a solution. Instead, they finalized a series of other measures to rout al Qaeda from its base in Afghanistan, including rearming the rebel Northern Alliance.
Those recommendations were being forwarded from Rice to Mr. Bush when the Sept. 11 hijackers struck, officials said.

Predator drones have featured in several key missions since Sept. 11, 2001. In the war in Afghanistan, they killed al Qaeda military chief Mohammed Atef. Last fall, a Predator was used to assassinate an al Qaeda operative in Yemen.