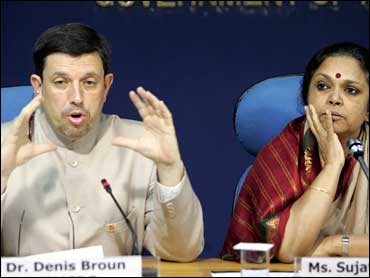 India plans to provide free anti-retroviral drugs to combat HIV — the virus that causes AIDS — to around 100,000 people by early next year, a top health official said, as this nation struggles with the largest number of AIDS infections in the world.

With 5.7 million people already infected, India is stepping up its campaign against the disease, Sujatha Rao, the top official in India's AIDS control program, told reporters.

Health authorities are accelerating a campaign to promote safe sex, popularize the use of condoms and expand the network of treatment facilities to reach out to people in six high-prevalence states across the country, she said.

"We are also creating awareness among people in schools, colleges and through the media on what causes HIV. Once people know that AIDS is treatable, although not curable, it will reduce the stigma and discrimination associated with the disease," Rao said.

Free anti-retroviral drugs are a major part of the plan.

"By August, we will be able to reach anti-retroviral therapy drugs to around 85,000 people infected with the virus," Rao told journalists. "But by early 2007, we will have drugs made available to 100,000 people with HIV."

Around 35,000 people are currently getting free anti-retroviral drugs from 52 health facilities across the country. The government plans to extend the drug distribution to 100 health centers by early 2007, authorities said.

India's has an annual budget of rupees 9 billion (US$200 million, euro166 million) for the financial year 2006-2007 for its HIV/AIDS prevention program, according to Health Ministry figures.

Anti-retroviral therapy is a cocktail of drugs which helps manage immunity-debilitating effects in AIDS patients. But their use has remained limited in the developing world because of high costs.

"4,500 is not enough. This is one area we have to expand our facilities," said Rao. "There is a lot of work to be done," she said listing traditional risk groups such as prostitutes, gay men and drug users increasing the dangers of the disease spreading in the wider population through heterosexual sex, with young people particularly vulnerable.

However, UNAIDS, the United Nations agency working on AIDS prevention, appeared satisfied with the pace of India's efforts at curbing the spread of AIDS.

Dennis Broun, UNAIDS chief in India, said Friday that although India topped the list of countries with the largest number of AIDS patients, the percentage of the country's 1.05 billion population suffering from AIDS was less than 1 percent.

"India has the right priorities, the right approach. By next year, 100,000 will be under treatment. It should make a dent," Broun said.