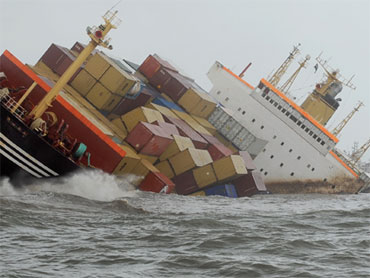 Indian coast guard vessels and helicopters worked Monday to contain oil spilling from a stricken container ship that collided with another vessel in the Arabian Sea, India's defense ministry said.

Helicopters sprayed chemicals on the oil spill to prevent it from spreading, Nambiar said.

The amount of oil leaked was unclear. The environment minister of Maharashtra state told reporters Monday about 2 tons of oil was pouring into the water every hour.

The MSC Chitra was carrying several thousand tons of oil products such as diesel and lubricants, Environment Minister Suresh Shetty said, adding the government was consulting foreign experts on how best to contain the spill.

The ship was still listing deeply Monday. The MV-Khalijia-II had less damage and posed less risk; its cargo wasn't disclosed.

The Jawahar Lal Nehru port was closed at least until Wednesday because of the collision and spill.

Government officials in coastal areas near Mumbai have been asked to test sea water in their area to check how far the oil may have spread, Chhagan Bhujbal, another senior minister told reporters.

The captains of both vessels have been asked to appear before local officials to explain how the collision happened, police said.

At least 250 containers from the damaged vessel fell off and port officials were trying to salvage them to avoid navigational hazards to other ships, officials said.

Crews from both vessels were rescued without any serious injuries, Nambiar said.