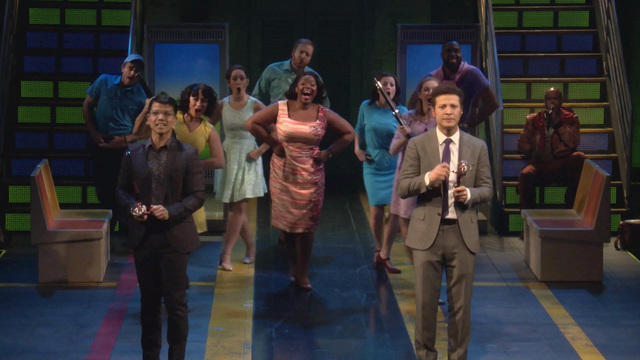 It’s clear that a cappella music is hitting a high note. What was once a niche music style found in college competitions has gone mainstream, with Grammy-winning recordings and a hugely successful movie franchise, “Pitch Perfect.”

“Why do you think modern audiences are responding to a capella so much?” CBS News’ Jamie Wax asked them.

“I think it’s analog versus digital. And in a world that’s increasingly digital, there’s nothing more human and in the moment than human voices coming together to sing harmony,” Anderson-Lopez said.

“In Transit” is the first Broadway musical with no instruments and no recorded music – only live, human voices.

“Sometimes it’s done so well, people will say to me after the show, ‘Oh, but those recordings were really nice,’ in the moments where you don’t see the actors. And in fact, it’s never a recording,” Wordsworth said.

The show’s creators themselves formed an a cappella group in the 1990s, and came up with an ambitious plan in 2001 to write a Broadway show together.

“I don’t think we ever had the idea to write a Broadway show. …The initial idea was that we were going to do an evening of music, of original songs about our lives,” Wordsworth said.

“Then 9/11 happened, and we were all just kind of craving a deeper meaning, and the connection with people,” Kaplan said.

It would be 15 years of struggle before that idea became “In Transit,” which follows the intertwined lives of 11 New Yorkers. In that time, Anderson-Lopez, found silver screen success. She and her husband wrote a score that included “Let It Go” for the Disney film, “Frozen.”

But winning the Oscar never distracted her from her goal of getting “In Transit” to Broadway.

“Even as a group who had performed a cappella for years, taking that and putting it in the context of telling a theatrical story had to have a lot of challenges,” Wax said.

“And dance, as it turns out,” Kaplan said.

Former “American Idol” runner up and seasoned Broadway performer Justin Guarini is one of the stars of the show.

“Every single member of this cast is kind, friendly, there are no egos, nobody’s better than anybody else,” Guarini said. “And we’re having a good time and we’re all enjoying one another and we literally and figuratively are in harmony every single night.”

The cast and creative team agree that going all a cappella has been rewarding -- and exhausting.

“Do you all think you’ll work together again?” Wax asked.

“Sure hope so. Yeah,” Kaplan said.

“And would it be another a capella project?” Wax asked.

“No,” they said in unison, laughing.

“Next one, definitely not,” Anderson-Lopez said. “At least a piano, a guitar and a drum set.”

The creative team for “In Transit” brought in the godfather of modern a cappella for the musical arrangements: Deke Sharon, the man behind the music in the “Pitch Perfect” films and who has worked with bands like Pentatonix.