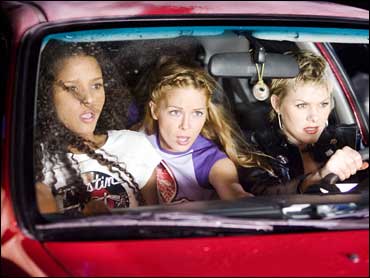 Cannes is not all glitz and glamour. For many film buyers and sellers, the guts of the festival is blood and guts.

In Cannes' frenetic film market, industry players wheel and deal over movies with titles like "Motor Home Massacre" and "Cadaverella," feeding an insatiable global appetite for shock and schlock.

It's not just the niche distributors almost everyone seems to have a horror movie or two to offer, with titles ranging from "Loch Ness Terror" ("She's Back ... and She's Hungry") to "Poultrygeist: Night of the Chicken Dead."

This once-disreputable genre has gone mainstream, even highbrow. Quentin Tarantino's stalker-on-wheels saga "Death Proof" an homage to 1970s B-movie kitsch, is in the running for Cannes' top prize, the Palme d'Or, competing against art-house films and socially conscious dramas.

Independent studio Lionsgate Films has had huge box-office success in the past few years with low-budget horror films such as "Saw" which spawned two sequels, and "Hostel." Lionsgate's Cannes catalog continues the trend with titles including "Midnight Meat Train," "The Burrowers" and the inevitable "Saw IV."

Other studios have followed suit — hardly surprising given the potential rewards. The relentlessly graphic "Hostel" cost less than $5 million to make but took in more than $80 million at the global box office.

Horror's new popularity is no surprise to Darrin Ramage, president of producer-distributor Brain Damage Films. His Cannes market stall is festooned with posters for "Swamp Zombies," "Death Factory" and other blood-drenched features.

"All genres are cyclical," Ramage said. "Four years ago, action was huge. You'd walk through the aisles of the (festival palace) and all you saw was posters for action movies. I've been in the business so long I've seen the up and down of horror three times."

There are questions about whether tragic real-life events might lessen the public's appetite for gore. Debate about the effects of violent movies was reopened by pictures of student gunman Seung-Hui Cho, who killed 33 people, including himself, at Virginia Tech University last month, adopting poses reminiscent of the violent and Cannes prize-winning South Korean film "Oldboy."

Lionsgate attracted some criticism with a series of graphic ads for "Hostel: Part II," whose plot metes out gruesome fates to college students. But he still plans to release the film next month.

There are signs, however, that the horror market may be saturated. Some distributors say they are finding it hard going at Cannes this year.

A digital era that has transformed the way people view entertainment increasingly, and often illegally, over the Internet and a glut of content mean buyers are becoming choosier.

Horror die-hards like Ramage are confident that whatever the whims of the market, the genre will endure.

Horror fans, he said, are looking for two things: "B and B: blood and boobs."

"To fill the appetite of the horror fan, you need a whole lot more than what Hollywood can deliver."