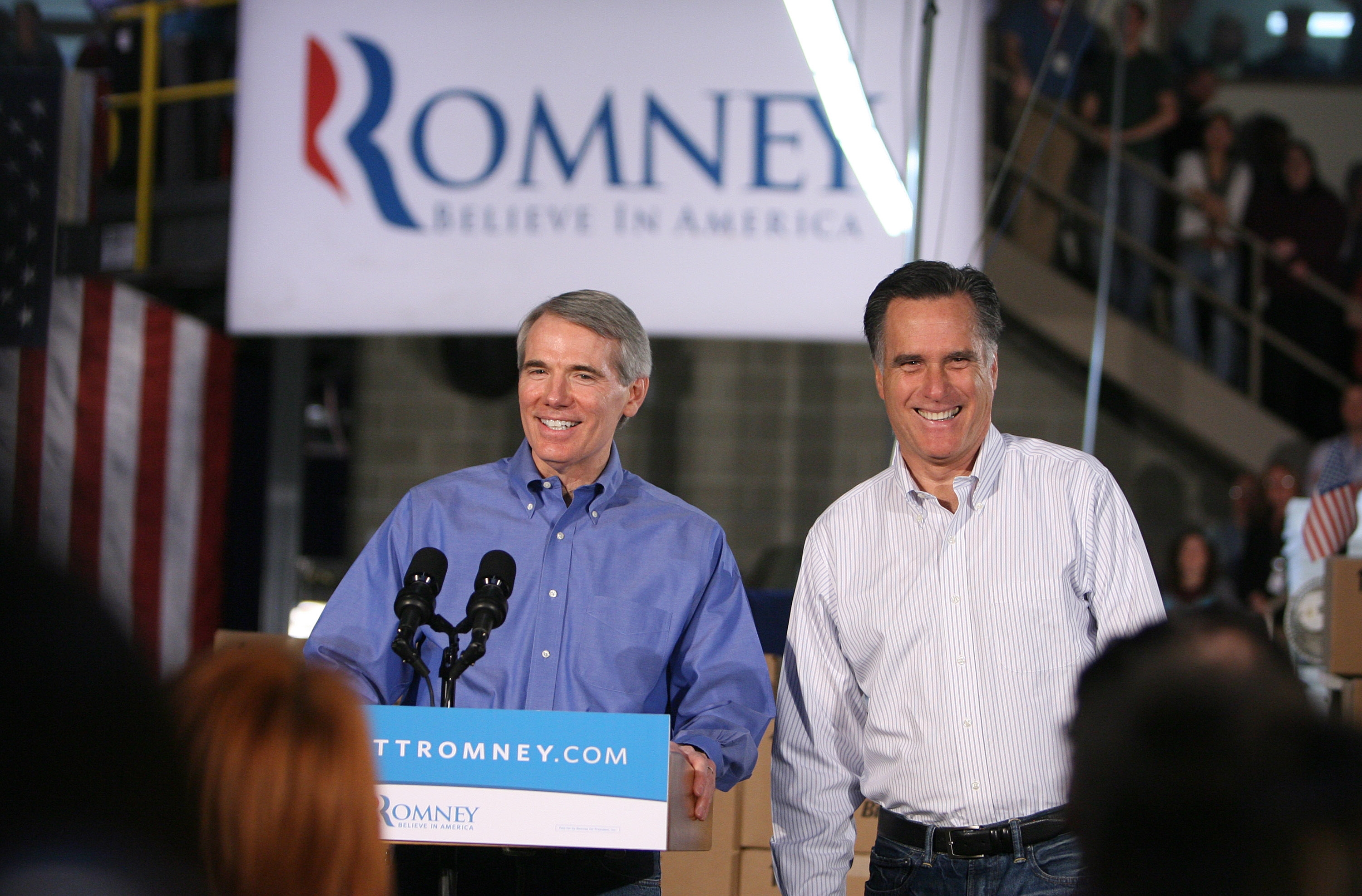 Whoever becomes Mitt Romney's running mate will have two moments in the spotlight: a speech at the Republican convention at the end of August, and a debate against Vice President Joe Biden on Oct. 11 in Danville, Ky.

The speech is the easy part. If Romney wants to be absolutely confident in the debating abilities of his partner, there's only one choice: Ohio Sen. Rob Portman, the king of GOP debate prep.

Portman has played Al Gore for George W. Bush, John Edwards for Dick Cheney, and, most recently, Barack Obama for John McCain. Each time he has studied hours of videotape and devoured briefing materials on their positions to perfect his portrayals in debate rehearsals.

(Portman delivered most recent Republican Weekly Address. Watch in the video to the left.)

Steve Schmidt, who was the senior strategist on McCain's 2008 campaign, said Portman is "a major league presence" on the GOP debate scene and would be formidable against Biden. Another GOP strategist, who insisted on anonymity in order to speak freely, called Portman "everything that Joe Biden is not. "Rob is not flip -- Joe Biden can be flip at times. He is not angry -- sometimes Biden gets angry. He's very measured, very intelligent, he has an in-depth knowledge of issues... [and] he understands the viewpoint from which Biden would argue, which is a huge advantage."

Each of the other top veep contenders has a debate-related flaw, or at least a big question mark next to his name. For former Minnesota Gov. Tim Pawlenty, it was his performance in a June 2011 presidential primary debate. After coining the term "Obamneycare" just before the debate, he refused a moderator's invitation to use it against Romney - thereby passing up the chance to cement a link between Romney's Massachusetts health care law and the federal law.

(Watching Pawlenty on "CBS This Morning" on Thursday in video to the left.)

Some Republicans say the "Obamneycare" moment was not a fatal flaw. "Normally you don't want to make a strong attack like that in a debate and I'm pretty sure that some of his advisers said he must do it and some of them said he shouldn't," said Charlie Black, a longtime Republican strategist and informal adviser to the Romney campaign. "Usually voters that are watching the debate want to hear polite criticism, or humorous criticism, or friendly banter over issues. They don't want to see somebody up there with a scowl on their face."

Schmidt said Pawlenty will have learned from the costly error during the primary campaign, and will now be better suited for the national debate stage.

Louisiana Gov. Bobby Jindal made an unfortunate national debut in 2009, when his response to President Obama's State of the Union address was widely panned by critics. He's had more practice since then, but still isn't completely error free. On a Republican National Committee call a few weeks ago to respond to the Supreme Court's ruling on the healthcare reform law, Jindal nearly called the law "Obamneycare" -- even though it was an attack term he had never used before.

Republicans point to Jindal's intellectual prowess and wonky policy knowledge as factors that could save him in the debates. That, and low expectations -- the same thing that benefited former Alaska Gov. Sarah Palin in 2008.

(Watch Ryan's recent appearance on "Face the Nation" in the video to the left.)

Wisconsin Rep. Paul Ryan is a party star respected for a budget proposal, embraced by Romney and congressional Republicans, that cuts spending and entitlements and makes major changes in the Medicare program. That budget is a top Democratic target -- meaning Ryan would be on the defensive about his own proposals throughout a debate with Biden.

"You want the race to be about Mitt Romney, not about the Paul Ryan budget, so the degree to which you get a vice presidential candidate who forces the terms of the debate away from where you want them to be would be a problem," Schmidt said.

Jindal, Pawlenty and Ryan are all well versed in domestic policy, but they do not have foreign policy backrounds. That would put them at a distinct disadvantage against Biden, who was chairman of the Senate Foreign Relations Committee before becoming Obama's running mate. "It would be pretty easy to show that weakness of the whole ticket on that," said a Democratic strategist who asked not to be named.

What of Biden's own strengths and weaknesses? The vice president is an experienced debater but far from a perfect orator. No Scrooge with his words, he was famously asked in a 2007 Democratic primary debate if he could contain his rhetorical excesses.

Biden was diligent about his own preparation for the vice presidential debate in 2008, even though Palin was expected to be a weak opponent. "He was more open than many politicians I've worked with to constructive suggestions," said the Democrat, who was familiar with Biden's preparation for that debate. "He was really thinking, 'well, what is my opponent going to say and what do I want to say for that?' which is I think one of the hardest things that someone has to learn in order to be a good debater."

Biden's opponent this time around will no doubt be advised to try to knock him off script, perhaps by goading or otherwise baiting him. "Off message he's proven that he can make mistakes," the Republican strategist said of Biden.

So the advantage once again goes to Portman, who proved in 2008 that he can needle with the best. His portrayal of Obama was so effective that he got under McCain's skin multiple times. The experience was so memorable that McCain recently joked to the New York Times, "I hate him still."