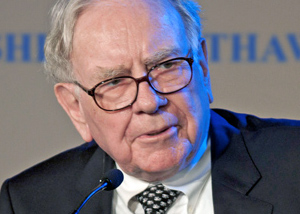 In his closely read annual letter to shareholders, published Saturday, Warren Buffett offered new insight into his choice of successor, reaffirmed his long-term confidence in the U.S. economy and stock market, and predicted an eventual, and possibly dramatic, upturn in the real estate market.

The most useful information in the letter is Buffett's insight into the market, which we'll detail below, but there was also some news.

Buffett announced he had chosen a successor as CEO of Berkshire Hathaway, although he declined to name him. Buffett is 81, his partner Charlie Munger is 88, and some market watchers believe their advanced ages have weighed on Berkshire's share price. Shares declined 4.7 percent last year, compared with a slight gain for the broad market.

Buffett had previously acknowledged there were three leading candidates for the top job at Berkshire (BRK), but now he has narrowed it down to one. Buffettolgists will be buzzing over clues in his latest letter. Chief among them: He writes that the two money managers he hired in the past year -- Todd Combs and Ted Weschler -- "will be helpful to the next CEO of Berkshire in making acquisitions." In other words, neither of them will be the boss.

One manager who Buffett singles out for particularly heaping praise is Ajit Jain, who runs Berkshire's reinsurance group, arguably the core of the $200 billion company (Berkshire's market value is roughly equal to Google). Buffett says Jain has added many billions of dollars of value to Berkshire, and that Munger "would gladly trade me for a second Ajit. Alas, there is none."

Berkshire announced fourth quarter financial results Saturday as well. The company's net income of $3.05 billion fell short of analysts expectations, and was well below year ago results of $4.4 billion. The shortfall was mostly due to paper losses in the company's dervative portfolio, but also because of weakness in its housing holdings and underwriting losses in its insurance group. Buffett's preferred measure of success -- book value of Berkshire's holdings -- climbed 4.6 percent.

True to form, Buffett diverges from the standard CEO playbook and devotes a chunk of his letter to detailing his 2011 mistakes. For starters, he kicks himself for buying bonds of of Energy Future Holdings, an electric utility in Texas. He writes that "the company's prospects were tied to the price of natural gas, which tanked shortly after our purchase." Buffett hasn't had great success in the energy sector; he bought ConocoPhillips when oil and gas prices were near their high in 2008.

He also notes that in last year's letter he predicted a housing recovery would have begun by now. "I was dead wrong," he writes. That said, he still believes his only error was timing: The U.S. is creating households faster than it's building houses, he reasons, so eventually supply will outstrip demand and the market will snap back, reducing unemployment and goosing the economy.

Many people look for wisdom, rather than news, in Buffett's annual letter, and he came through:

He notes that to buy all the gold in the world would cost about $9.6 trillion. With that same investment you could buy all the farmland in the U.S. and 16 Exxon Mobils, according to his math. Over the coming century, the farmland and Exxon would produce trillions in crops, dividends and profits, while the gold would just sit there.

The logic is simple: If you are going to be a net buyer of stocks in the future, either directly with your own money or indirectly (through your ownership of a company that is repurchasing shares), you are hurt when stocks rise. You benefit when stocks swoon. Emotions, however, too often complicate the matter: Most people, including those who will be net buyers in the future, take comfort in seeing stock prices advance. These shareholders resemble a commuter who rejoices after the price of gas increases, simply because his tank contains a day's supply.

So if the market keeps us waiting a while longer for Dow 13,000, look on the bright side.