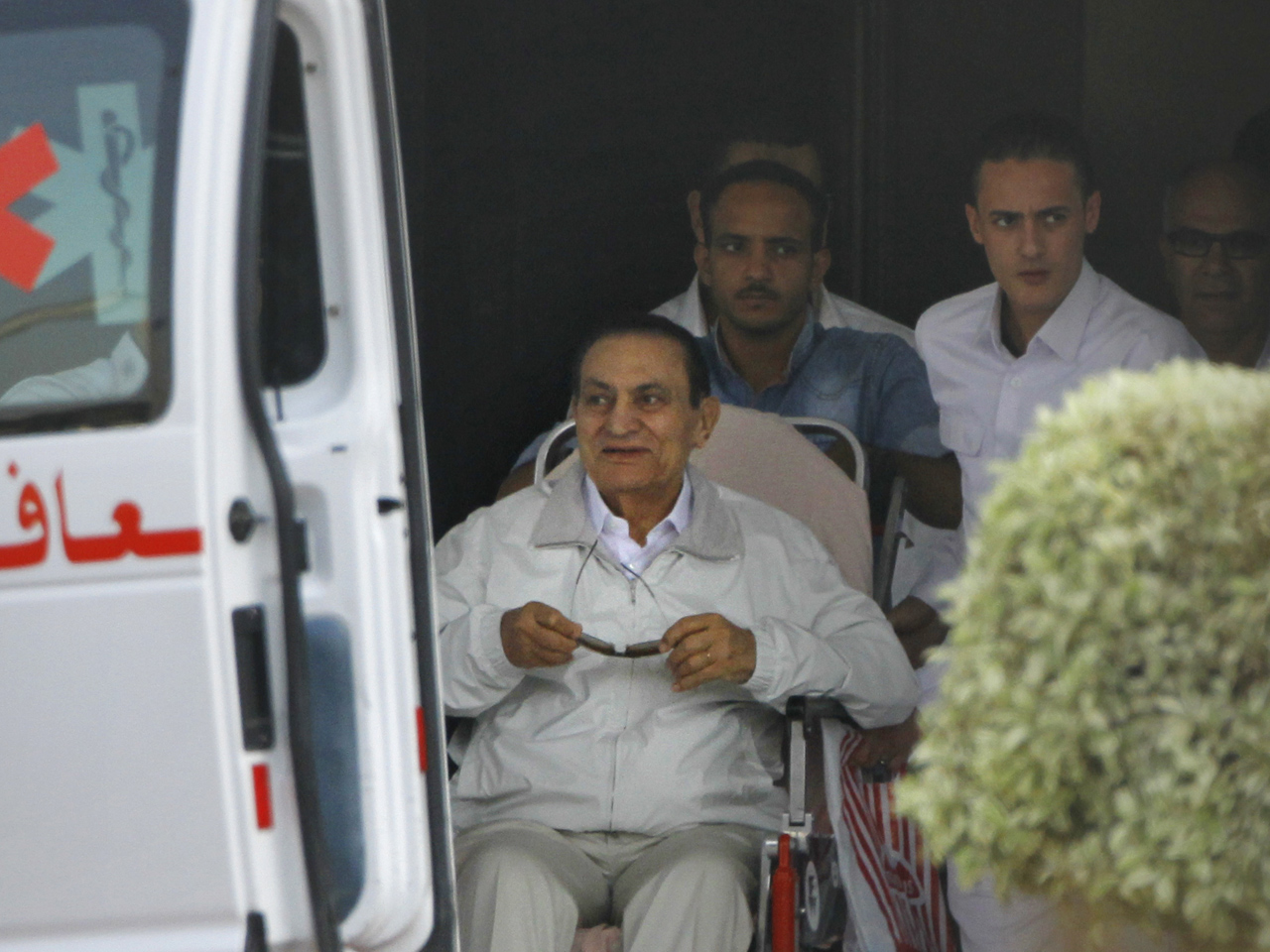 CAIRO Egyptian courts on Sunday heard separate court cases against former President Hosni Mubarak and top leaders of his archrival, the Muslim Brotherhood, both over allegations of killing protesters in separate instances.

Egyptian media portrayed the prosecution of longtime foes as "trials of the two regimes," an attempt to show that both Islamists and secular-leaning Mubarak authoritarian regimes are alike after a July 3 military coup toppled President Mohammed Morsi, a Brotherhood member.

Weeks of mass rallies by Muslim Brotherhood supporters over Morsi's ouster have weakened over the past days as security forces have detained many Brotherhood leaders. The military-backed government has responded by relaxing curfew hours, trying to signal a return to normalcy across the country.

"We have crossed the swamps and muddy pools, and now we are on the safe side," Ahmed el-Musalamani, a spokesman for interim-president's spokesman, said Sunday.

He added: "We have overcome the tough phase."

At a heavily-fortified courtroom in eastern Cairo, Mubarak looked relaxed in dark sunglasses and white clothes as he appeared for his first court appearance since he was released from prison last week and transferred to a military hospital. The 85-year-old ex-president sat in a chair next to his two sons who are being tried in a separate corruption-related case.

Mubarak has been in detention since April 2011. He was found guilty and sentenced to life in prison last year for failing to stop the killing of some 900 protesters in the 18-day 2011 uprising, but his sentence was overturned on appeal. In April, his retrial opened along with those of his security chief and six top police commanders. His trial has been postponed to Sept. 14.

In a separate hearing Sunday, top Brotherhood leader Mohammed Badie and five other members of the Islamist Brotherhood saw their hearings postponed until Oct. 29. The defendants, two of whom are still in hiding and being tried in absentia, face charges stemming from clashes outside the Brotherhood's Cairo headquarters on June 30 that left nine dead. The four in detention were not present in the downtown Cairo courtroom for security reasons.

The military ousted Morsi after millions took to the street demanding he step down. He's been held incommunicado since his overthrow. Prosecutors have accused him of conspiring with foreign groups to break out of prison during the chaos of the 2011 uprising against Mubarak. He is also being investigated in connection to another case of protesters' killings in December.

Authorities allege that Morsi supporters have committed acts of terrorism since the coup, pointing to a string of attacks against churches and government buildings. The Brotherhood and Morsi supporters deny their protests are violent and deny that they attack churches, accusing authorities of smearing their movement.

Rights groups, however, say Islamist groups have incited violence against Christians, who have been blamed collectively for Morsi's overthrow.

The Egyptian Initiative For Personal Rights issued a report on Sunday documenting what it said was an "unprecedented spike in scale of sectarian violence and reprisals" against Coptic Christians over a four-day period in August.

At least 45 churches came under attack and a total of seven citizens were killed, the initiative said. It blamed security forces for failing to intervene and Islamist groups for helping to "feed the current wave of sectarian attacks."

Islamists also issued renewed calls Sunday for demonstrations in a statement. Arrests and killings appear to have weakened the Brotherhood's ability to mobilize its following. Calls for rallies fizzled out on Saturday as the government eased up the curfew hours affecting much of the country.

The military-backed interim government meanwhile is pursuing a fast-tract transition plan that it says will return the country to democracy.

On Sunday, a 10-member panel of experts handed a first draft of proposed constitutional amendments to the interim president, a first step toward amending the now-suspended charter drafted last year under Morsi. A second panel of 50 members will work on the amendments before finalizing them and putting them for public vote.

Once the constitution is adopted, the plan calls for presidential and parliamentary elections early next year.