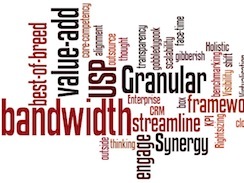 COMMENTARY If I had to write one wildly popular business article -- just one -- it would have to be about the horrors of business jargon. For some reason, it makes people crazy. But here's the thing. Those innovative concepts become corporate speak for one reason. Because they work.

Of course, phrases like "paradigm shift" and "outside the box" have become so overused and abused to the point where if you utter them today you'll likely get lynched by coworkers.

And when U.C. Berkeley management professor Jennifer Chatman says, "Jargon masks real meaning. People use it as a substitute for thinking hard...," that sounds to me like she needs to exercise a little critical thinking herself. Sure, some people abuse jargon, but others use it because it means exactly what they want to communicate.

For example, the first "awful expression" cited in the article is "core competency," which gets picked apart, word by word, by yet another management professor who calls it a "silly phrase" because its literal meaning "bothers" him. How trite can you get?

Look, I hate management fads more than anyone I know, but the truth is that core competency has been such a game changer that it's still widely used by executives and consultants twenty years later. It's so ingrained in how companies operate that now it seems like a no-brainer.

Just about every company I've ever worked with has needed help trying to figure out what to focus on and what to leave alone. If phrases like core competency and value proposition help teach executives how to run their companies more effectively, then they're neither "silly" nor "substitutes for thinking."

10 things you should never say at work10 things you never want to hear at workIt's not what you say, but how you say it

To drive the point home, here are seven phrases -- call them business jargon if you like -- that have gotten quite a bit of airplay in management circles. I still find them to be no less innovative and useful today than when I first learned them. And just to really annoy you, I've included their acronyms, where applicable.

Goal alignment. One of the most critical and useful management tools for operational efficiency across organizational boundaries. I'm sure you're familiar with old concepts like marketing and sales are natural enemies and everybody hates HR? Well, they represent dysfunctional organizations and goal alignment is the cure.

Zero-based budget (ZBB). A method of budgeting by prioritizing and justifying projects based on projected expense and return-on-investment (ROI). If federal, state and local governments would simply adopt this discipline, there would be no more budget deficits or government debt. Sprint (S) and Sony (SNE) need to make use of it too.

Plan of record (POR). Agree on a plan, record or document it, make sure everybody's there to change it. Eliminates "plan du jour," a favorite among the dysfunctional executive crowd.

Value proposition (aka value prop). What differentiates one company's products and services from the competition? A critical corporate and product positioning tool. It's what Yahoo (YHOO), RIM (RIMM), Radio Shack (RSH), and a whole host of companies desperately need.

What's in it for me (WIIFM)? Whoever you're trying to negotiate with or sell to internally or externally, put yourself in their shoes and ask WIIFM? It's a powerful tool.

Constructive confrontation. One of the great concepts to come out of Andy Grove's reign at Intel. Helps people to resolve issues and conflict without getting personal, as in "attack the problem, not the person."

Negatron. Someone who's always pointing out what can't be done, why it won't work, and never has a positive thing to say about anything to anyone. It also helps you to avoid cursing in those PC environments: "Don't be such a negatron!"

Of course, I can go on and on with annual operating plan (AOP), standard operating procedure (SOP), yada yada, but why throw fuel on the fire when it'll just make you blow a gasket and go ballistic?