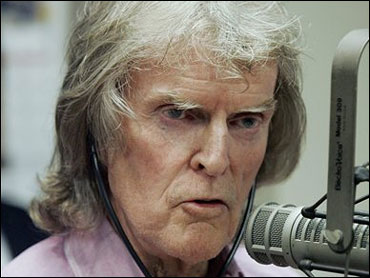 At stake is $40 million, reports said.

Fortune magazine says Imus has hired a top First Amendment attorney, because, according to a source who has read Imus' contract with CBS, the pact encouraged the shock-jock to be irreverent and make character attacks.

"Company (CBS Radio) acknowledges that Artist's (Imus') services to be rendered hereunder are of a unique, extraordinary, irreverent, intellectual, topical, controversial and personal character," reads the contract, according to CNN.com.

CBS Radio spokeswoman Karen Mateo declined to comment to CBSNews.com on either the possibility of a lawsuit or the contract language.

Imus was fired April 12 from the syndicated radio show that he had hosted for nearly 30 years, a day after MSNBC said it would no longer televise it. Imus' description of the Rutgers women's basketball team as "nappy-headed hos" set off a national debate about taste and tolerance.

Imus made the remark on April 4, the day after the Rutgers team lost in the national championship game. He subsequently met with and apologized to team members for about three hours at the governor's mansion in Princeton, N.J.

Attorney Martin Garbus confirmed to CNN that he has agreed to represent Imus, and said he plans to file an action against CBS in the near future.

CBS' attorneys, according to Fortune, maintain that Imus was fired for cause, and therefore is not owed any further payments on the five-year $10 million-a-year contract he signed in 2006.

But the source tells Fortune that the contract not only encouraged Imus to skate on the edge of taste, but stipulated that he be given a warning before he could be fired.

On the other hand, the contract may also say that Imus had to obey Federal Communications Commission rules for broadcasters, including a prohibition of profanity. The FCC defines profanity as language that is "grossly offensive" to the people who hear it.

Meanwhile, Imus may be planning a comeback.

The New York Daily News reports he is telling close friends he hopes to be back on the air with a few months. One friend speculates his return likely would be on commercial radio, not unregulated satellite radio.

If that happens, the Rev. Al Sharpton, who led the campaign to get Imus fired, says his next move will depend on how Imus conducts himself.

"If he comes back as his old self, we'd go back to the advertisers and ask them not to support him," Sharpton told the News.

Sharpton's threat of consumer boycotts caused a number of major advertisers to withdraw their ads from Imus' CBS Radio and MSNBC television show.

The cantankerous Imus, once named one of the 25 Most Influential People in America by Time magazine and a member of the National Broadcasters Hall of Fame, was one of radio's original shock jocks.

He first came to prominence at WGAR Cleveland, a widely-heard clear-channel station, then moved to WNBC-AM in New York in the early 1970s. His humor then was more prankish, with routines such as "10,000 Hamburgers To Go," in which he pretended to be an Army Reserve general placing an order at McDonald's for his troops.

But a mix of cocaine and vodka made him undependable, and WNBC took him off the air. After sobering up, he returned to the air and settled into a mix of highbrow talk about politics and culture, with locker room humor sprinkled in.

When WFAN moved from the 1050 frequency and took over WNBC's 660 AM, the "Imus in the Morning" program stayed in place, the only non-sports programming on the station.

CBS Radio and CBSNews.com are both parts of CBS Corp.