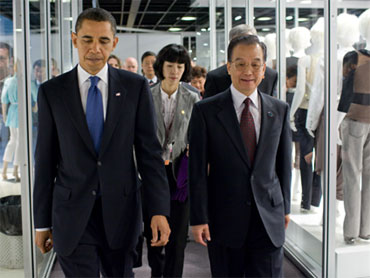 The major environmental conference . Mr. Obama and other proponents of action on the issue hope their endeavors will eventually produce a formal treaty.

Attempting to find a dividend from his heavy investment in domestic and international political capital, the president described "a meaningful and historic breakthrough." The White House said it was the first time the world's major economies agreed "to accept their responsibility in confronting climate change."

In a brief session with reporters, the president repeatedly acknowledged the tentative nature of the agreement. Describing a "fundamental deadlock in perspectives," he said a legally obligatory pact was "not achievable at this conference."

The president appeared weary following an overnight flight to Denmark and non-stop negotiations with other leaders.

Because the White House imposed what amounted to a limited news blackout during Mr. Obama's meetings in Copenhagen, it would be hours before reporters and the nation learned details of what were often spur-of-the-moment diplomatic efforts by the president and his team.

There was an unimaginable scene as the president strolled into a meeting of other leaders, only to find there literally was not a seat for him at the table. He quickly said he would "sit by my friend Lula," Brazilian President Luiz Inacio Lzula da Silva.

Reporters summoned to a quick photo op of the session witnessed an unusually chaotic scene for a diplomatic setting.

Mr. Obama was heard raising his voice as he asked, "Mr. Premier, are you ready to see me? Are you ready?"

The question was aimed at Chinese Premier Wen Jiabao.

There was an uncharacteristic edge to Mr. Obama's voice as he addressed the Chinese leader.

It reflected U.S. exasperation over China's decision to assign a lower-level official to summit talks even though the premier was in the conference center. The president had already met with Wen shortly after arriving in Denmark.

Aboard Air Force One on the flight home from Copenhagen, a senior official revealed an intriguing account of the climax to the president's long day in Denmark. The official described the president's irritation with the Chinese.

He told his staff, "I don't want to mess around with this anymore. I want to just talk to Premier Wen."

Chinese officials sent mixed signals. They said Wen was at a hotel as his staff waited at the Copenhagen airport. The U.S. was also under the impression that other key countries were ready to abandon the summit.

The Chinese sent word that Wen would meet again with the president.

When Mr. Obama arrived for that meeting, he found the Chinese leader conferring with his counterparts from Brazil, India and South Africa.

A senior official denied that the president and Secretary of State Hillary Clinton crashed the meeting. The official explained Mr. Obama merely showed up at the appointed time to confer with Wen and found the other leaders there too.

Top Obama aides learned of the meeting only moments before the president arrived.

The senior official was at a loss to explain why the U.S. was not fully aware of the activities of some of the other key players at the meeting except to note more than a hundred countries were involved. Officials say the impromptu side summit helped the five countries agree on options to verify pollution reduction efforts.

On Saturday, the president elaborated on the results. He said, "This breakthrough lays the foundation for international action in the years to come."

But the "years to come" formulation only underscores the tentative nature of the conclusion of the Copenhagen meeting.

For reporters covering Mr. Obama, it was a day of behind-the-scenes speculation and frustration.

Throughout the long day, Gibbs sent a few details through aides or e-mails.

For veteran reporters, it was all reminiscent of a formal news blackout imposed at President Reagan's famous October 1986 summit with then-Soviet leader Mikhail Gorbachev in Reykjavik, Iceland.

It wasn't until the end of the two-day meeting that the world learned how close the U.S. and Soviet leaders came to reaching an arms reduction deal before the talks collapsed.

(In a bit of historic irony, President Obama and Russian leader Medvedev announced major progress on a new arms reduction deal as they met on the sidelines of the Copenhagen meeting.)

International summits are usually orderly events. Planners called "sherpas" meticulously set the stage for presidents, prime ministers and other leaders to seal the deal on the issue or issues on the table.

That clearly was not the case in sometimes chaotic Copenhagen.

President Obama returned home from the global warming summit as a heavy snow blanketed Andrews Air Force Base early Saturday morning. He motorcaded to a whiter White House as the worst December snowstorm in history two days before the official start of winter.