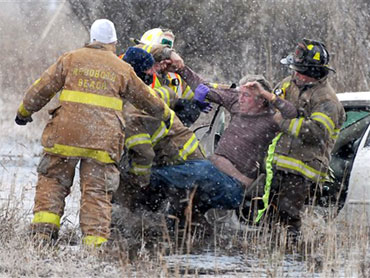 A blizzard-like storm rocked the Mid-Atlantic and Northeast on Saturday, crippling travel across the region and leaving hundreds of thousands of customers without power.

Five deaths appeared to have been caused by the storm system, which stretched from the Carolinas north to New England and also spread into some Midwestern states. The 16 inches of snow that fell at Reagan National Airport outside Washington was the most ever recorded for a single December day, while about 16 inches had also fallen in Philadelphia.

One person in Virginia was killed in a traffic accident caused by slick roads, and authorities said the weather may have contributed to another traffic death. A third death is believed to have been caused by exposure. In Ohio, two people were killed in accidents on snow-covered roads hit by the same storm system.

Those who did venture out were treated to nearly desolate stores on what is usually one of the busiest shopping days of the year. There were virtually no lines to get a picture with a mall Santa on the last weekend before Christmas.

The National Guard used Humvees to rescue stranded motorists in Virginia and some 500 people had sought warmth and refuge in emergency shelters.

"The snow has not stopped falling, the storm isn't over, and folks should not think this is crying wolf," said Laura Southard, a spokeswoman for the Virginia Department of Emergency Management.

The monster storm has cut power to more than 350,000 people in seven states, reports CBS News Correspondent Bob Orr. The hardest hit is West Virginia, where 166,000 customers are without electricity, Orr reports.

Nearly two feet of snow fell in some areas, and the nation's capital was under a blizzard warning. Public transportation nearly ground to a halt, but it wasn't enough to keep senators from staying in session to debate health care reform. The slow-moving storm was headed to the northeast.

Most of the flights at Reagan National Airport and Dulles International Airport had been canceled, creating a ripple effect of delays across the country.

The runways at Reagan were closed until 6 a.m. Sunday. Dulles had one runway open, but were expecting many, if any, flights. BWI Thurgood Marshall Airport near Baltimore also closed Saturday afternoon, and travelers who tried to reach their destinations by train also faced long delays and threats of cancellations.

"It's going to be very challenging for people who weren't able to get out today to rebook on flights this week," said Tara Hamilton, a spokeswoman for the Metropolitan Washington Airports Authority.

Joy Rood, 20, played solitaire as she waited at Reagan for a flight to visit family in Los Angeles with her husband, who was asleep at a table outside an airport cafe.

"We had a canceled flight at Dulles at 6 yesterday because the plane had difficulties," she said. "So they cabbed us over here to — uh, what airport am I at?"

Philadelphia International Airport estimated that 70 percent of airline flights into and out of Philadelphia had been canceled, spokeswoman Phyllis Van Istendal said. She said the airport averages about 1,200 arrivals and departures per day, although somewhat less than that on Saturdays.

"At this point we're not seeing large numbers of people in the terminal building," she said.

If the number of stranded passengers starts to build, she said, airport officials will start handing out water, snacks and disposable pillows.

More flights have been canceled at Chicago's O'Hare International and Midway airports due to the winter storm on the East Coast and snow in the Chicago area.

The Chicago Department of Aviation on Tuesday afternoon reported delays of about 30 minutes for flights going in and out of O'Hare. It also says more than 75 flights there have been canceled.

The department says some flights in and out of Midway are delayed for 45 minutes or more and more than 30 flights have been canceled.

Chicago also is getting snow, but the National Weather Service says only about an inch is expected Saturday.

The Pennsylvania Department of Transportation began spraying roads with a salt solution on Thursday and had mobilized all 402 trucks available for the five-county Philadelphia region. The agency planned to deploy snowplows in force later in the evening to keep the roads clear; 96,100 tons of road salt were stockpiled and ready for use, said PennDOT spokesman Gene Blaum.

"We got on top of it early and we're going to have to be aggressive with it," Blaum said. "We're going to be working throughout the night into Sunday to keep the roads as passable as possible."

Snowplows cleared the runway at Andrews Air Force Base in suburban Washington as President Obama returned from climate talks in Copenhagen. The White House said Mr. Obama rode in a motorcade back to the White House, instead of taking his helicopter, because of the conditions.

Forecasts called for up to 20 inches of snow across the region, which was virtually a sea of white. The Smithsonian Institution closed its museums, and the National Mall, which normally would be swarming with tourists, instead was the scene of snowball fights and cross-country skiers.

For Chris and Kelly Fitzpatrick, who were visiting from Clearwater, Fla., the winter wonderland came at the perfect time.

In Virginia, about 100 people were taken to shelters in two counties, said Virginia Department of Emergency Management spokesman Bob Spieldenner.

"Some folks have decided to stay in vehicles, others have been taken to shelters," Spieldenner said. "We're definitely trying to keep people off the roads."

Virginia State Police spokeswoman Corinne Geller said traffic was moving, though slowly. One fatality had been reported, but otherwise there were no medical emergencies, she said.

"It's looks probably a lot worse than it is," she said.

Washington Mayor Adrian Fenty had declared a snow emergency for the city and forecasters issued a blizzard warning, saying the conditions could worsen.

Forecasters said it could be the most snow in the U.S. capital since a February 2003 storm dumped nearly 27 inches at Baltimore-Washington International Airport.

Forecasters said the storm system was expected to generate winds up to 35 miles per hour, which could cause near-whiteout conditions.

After a warm start to the ski season that delayed openings of many resorts, the storm arrived just in time for West Virginia's resorts, dumping more than 20 inches on some slopes, said Joe Stevens, a spokesman for the area's ski association.

"These are midseason conditions," he said. "The storm couldn't have come at a better time."

Despite efforts to clear roads, by Friday night, slick conditions had contributed to hundreds of accidents and slide-offs.

If you must travel today, get ready for delays and cancellations, or think about changing your trip. Because of the weather, some airlines say you won't have to pay a penalty for altering your travel plans.

Major airlines tried to get out in front of the weather by canceling flights to reduce delays - as the first big storm of the season bears down on the Mid-Atlantic States and the East Coast.

Some travelers to selected destinations next week are getting a break on changing their flight schedules, Pinkston reports. At least six carriers, including Delta, Northwest, United, Continental, US Airways and Jet Blue, announced limited fee waivers.

Depending on destination and date of travel, travelers who want to reschedule their flights will not have to pay extra.

On the rails, Amtrak was also being proactive - moving diesel trains into place just in case the storm disrupts power to electric locomotives.

Crews are keeping close watch on ice buildup on the overhead power lines, as well as on the switches that move trains from one track to another.

On the highways, law enforcement authorities were urging travelers in the hardest-hit areas not to travel - a tall order on the last shopping weekend before Christmas.

In southern West Virginia, Ron Hart's hardware store was swamped as customers bought heaters and other emergency supplies, just a week after a wind storm knocked out electricity and spawned an earlier emergency shopping surge.

Forecasters said it could be the most snow in the nation's capital since a February 2003 storm dumped nearly 27 inches at Baltimore-Washington International Airport.

Officials at Dulles International and Reagan National airports warned travelers to check on the status of their flights before heading to the airports. Some Saturday flights along the East coast were canceled ahead of the weather.

Jim Weintraub, owner of Ace Hardware in Asheville, N.C., said he picked up 1,500 pounds of rock salt Friday morning. An hour and a half later, "I'm just about out," he said.

But customers were thinking fun, too.

"I've been told we're the only store around with sleds," Weintraub said. "As I was driving back up to the store, my wife was calling me and saying, 'Where are you? People are waiting for sleds!"'

After a warm start to the ski season that delayed openings of many resorts, the storm arrived just in time for Winterplace Ski Resort's season debut Friday in southern West Virginia.

"It's perfect timing," said Winterplace President Terry Pfeiffer. "With the new snow coming in, there's not going to be much better skiing."

The Coast Guard sent an airplane to fly from North Carolina to New Jersey warning boaters by radio to stay in port if they didn't have an urgent need to be on the water.

Highway crews in Maryland, Delaware and the District of Columbia were spraying brine on heavily traveled roads to help prevent snow and ice from sticking.

Amtrak spokeswoman Karina Romero said the railway was putting extra crews on duty, in part to keep ice from forming on the overhead lines that power electric trains. Extra locomotives equipped with snow plows would also be available.

Ronin, a boy in Hollywood, Fla., described the scene to CBS News: "The houses have been converted into islands."