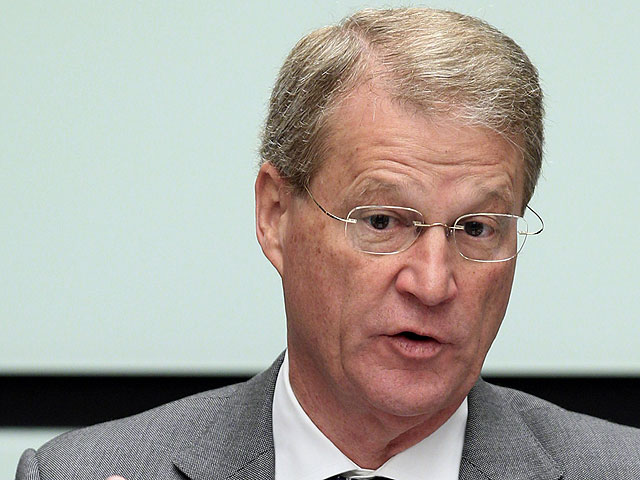 BRUSSELS - The International Monetary Fund, a key player in eurozone bailouts, on Wednesday pushed for radical changes in the region's handling of the debt crisis, offering to take the bold new step of intervening in bond markets to calm the financial turmoil.

Alarm over Europe's crisis has reached a new level, with many expecting an imminent default by Greece and the spread of the crisis to large economies like Italy and Spain. Banks are feeling the same type of credit squeeze that caused many to collapse in 2008.

"In these circumstances the possibility that economic activity turns downwards, that there might be another recession, is something that cannot be ruled out," warned Antonio Borges, the head of the IMF's Europe program.

To finally get a grip on the currency union's troubles, which have dragged on for almost two years, Borges said the eurozone needed new firepower and new tools.

The IMF could help the eurozone by intervening in markets by buying some countries' distressed bonds, Borges said.

Fears are rising about the health of the financial system. France and Belgium are struggling to keep Dexia bank from being the first major European lender to collapse since the end of the 2008 credit crunch.

In public statements until now, IMF officials had insisted on agreements made at a eurozone summit in July, which gave a first range of new powers to the region's bailout fund and tentatively offered a second, euro109 billion bailout for Greece, with modest losses accepted by banks on their Greek investments.

But Borges made clear on Wednesday that those decisions were no longer sufficient.

At the center of the IMF's new approach to the crisis is the eurozone's bailout fund, the euro440 billion ($580 billion) European Financial Stability Facility.

Borges said the fund's resources needed to be utilized more creatively to maximize their impact, offering backup from the IMF's own much larger reserves.

In a new report on Europe, the IMF says eurozone countries should consider using their crisis tools to guarantee bond issues from struggling countries.

Analysts have suggested that the EFSF could guarantee bond buyers against the first 20 percent or so of potential losses on bonds, which would make them a much safer investment.

The report also says eurozone countries should promise to compensate the European Central Bank against possible losses on purchases of shaky government bonds it has made, guaranteeing continued intervention from an increasingly reluctant ECB.

Both these moves have been discussed as part of a plan to bolster the effectiveness of the EFSF.

"The EFSF must be a catalyst of a movement which has to be much more significant in bringing other investors into the market," Borges said.

The IMF is ready to help Europe in that effort as soon as all countries have ratified the changes to the EFSF agreed in July.

For instance, the IMF could buy Italian and Spanish bonds on the open market alongside the EFSF, Borges said, giving the facility's investments more heft and credibility.

Buying up the bonds of struggling countries — and thereby lowering their funding costs — has been a key element of the eurozone's crisis strategy, especially for large countries like Italy and Spain that are considered too big to be bailed out.

The IMF could also give the two countries precautionary credit lines, Borges added.

Borges also acknowledged that there were serious problems with the eurozone's and IMF's rescue program for Greece. Any new rescue effort needs to be very different from the first bailout, with a much bigger focus on bringing down the country's massive debts and boosting growth, he said.

But Borges also piled pressure on Greece to take more stringent measures to get its economy back on track, saying there was no rush to take a decision on the payment on the next installment of bailout money because the country doesn't face a big bond repayment deadline until December.

That should give debt inspectors from the IMF, the European Commission and the ECB enough time to carry out their ongoing review and chart a new way forward for the country.

The tentatively agreed second, euro109 billion bailout will have to be revised, Borges said.

"In July we had this agreement which would have been a very, very strong source of support for Greece, which was conditional on program execution," Borges said. "So if the program is not executed then we have a really different world."

However, he said an overhaul of the second bailout program didn't necessarily entail bigger losses for banks and other private Greek bond holders.