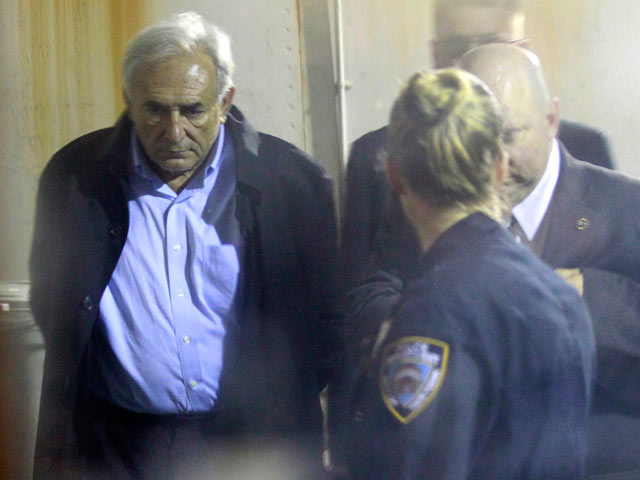 A political rival said Strauss-Kahn had engaged in a long-term pattern of sexual misconduct. Without providing proof, conservative lawmaker Michel Debre alleged that the potential French Socialist presidential candidate had victimized several maids at the luxury Sofitel hotel near Times Square where he is accused of assaulting a maid over the weekend.

The unproven allegations, and images of the handcuffed, grim-faced Strauss-Kahn being escorted by detectives outside a police station, were causing deep shock and dismay inside France, where Strauss-Kahn had topped the polls as a possible candidate in presidential elections next year.

Defenders of the former finance minister said they suspected he was the victim of a smear campaign. Others were re-examining whether Strauss-Kahn's reputation as a womanizer had an ugly, coercive side.

Novelist Tristane Banon's attorney said that after the 2002 attack she was dissuaded from filing charges by her mother, a regional councilor in Strauss-Kahn's Socialist party.

Lawyer David Koubbi told French radio RTL on Monday that Banon did not file suit earlier due to "pressures" she face over the alleged 2002 sexual assault, and would now because "she knows she'll be taken seriously."

Anne Mansouret, a regional Socialist official in Normandy and Banon's mother, said she had advised her daughter against filing suit against Strauss-Kahn years ago. She said she believed it was a temporary moment in which he "lost his way" — and that a lawsuit could forever stain Banon's career.

Speaking on BFM TV, Mansouret recalled telling her daughter then: "Listen, you know, if he had raped you, I wouldn't have any hesitation, but that wasn't the case — he sexually assaulted you, there wasn't any rape per se ... so until the end of your life, you're going to have on your resume, you know, Tristane Banon is the girl who ... "'

The newspaper Le Monde, citing people close to Strauss-Kahn, said he had reserved the $3,000-a-night suite for one night during a quick trip to have lunch with his daughter, who is studying in New York. It was not immediately clear who paid for Strauss-Kahn's personal travel but he and his wife, an heiress to a renowned art dealer, have extensive personal wealth. IMF sources told CNBC that the hotel expenses were exaggerated and were actually $525, which Strauss-Kahn paid personally.

He was flying back to Paris for meetings about the French presidential election run-up before heading to meeting with German Chancellor Angela Merkel in Berlin, the paper said.

Le Monde reported that Strauss-Kahn had lunch with his daughter in a restaurant after leaving the hotel, then took a car to the airport, where he checked in for a flight that he had reserved a ticket for long before the weekend incident.

According to one of her confidantes, Le Monde said, Strauss-Kahn's wife Anne Sinclair spoke to her husband after the lunch and then on his way to the airport. A confidante told the paper Strauss-Kahn had mentioned a "serious problem" but didn't make any reference to the hotel attack.

Without offering proof of his claims or the source of his information, Debre said the 32-year-old maid was not the only one the IMF chief had assaulted at the hotel.

"It's not the first time that DSK is involved in this kind of actions at the Sofitel," said Michel Debre, an outspoken lawmaker from French President Nicolas Sarkozy's conservative party — a rival to Strauss-Kahn's Socialists.

"That's where he always stayed. It happened several times and for several years. Everyone knew it in the hotel," Debre was quoted Monday as saying on the Web site of French weekly L'Express.

The hotel declined to respond to his comments.

French viewers were stunned by the images of the handcuffed Strauss-Kahn ducking stone-faced into a police car. In France, public figures are usually shielded from view in such circumstances.

Later Monday, a New York City judge ordered him held without bail on attempted rape and other charges until his next court appearance.

Fellow Socialists increasingly defended Strauss-Kahn, citing contradictions in the investigation, and pledged to stick to the campaign calendar.

A friend of Strauss-Kahn's, fellow Socialist politician Jean Christophe Cambadelis, said: "In the file, there are a lot of contradictions beginning with the escape, which was acknowledged today that it didn't happen."

"His close friends cannot believe that he is guilty and he will soon be with us. And finally, we are hoping that the trauma, in one form or another, with Dominique Strauss-Kahn we hope, will be surmounted."

"The Socialist Party has within its ranks men and women who have the ability to manage the state. There will be primaries that will allow us to choose that candidate, or the candidates that will carry the hopes for change in 2012," he said.

The chief of Sarkozy's conservative UMP party, Jean-Francois Cope, said he told the president that he asked fellow party members to "proceed with caution and restraint" in their comments, and Sarkozy supported the idea.

"I contacted a certain number of my UMP friends and asked them to be cautious if not silent in their comments regarding this affair because ... there is the principle of presumed innocent," he said.

The multilingual Strauss-Kahn is a forceful orator capable of holding up his end of a debate while checking his smartphone at the same time. He holds degrees in law, business administration, political studies and statistics, plus a PhD in economics from the University of Paris.

He had a successful stint as industry minister in 1991-1993 and an even more high-profile stint as finance minister in 1997-1999. When he got that job, his wife Sinclair, arguably the more famous of the two, quit a powerful television career to avoid a conflict of interest.

He was linked to a couple of corruption cases but never convicted.

A Socialist Party member since 1976, he has in recent years been seen as too market-friendly by some party purists, but that made him more palatable to the IMF. He and his wife sometimes come under criticism for representing the "champagne left," Socialists who defend the working and underclasses but live in luxury themselves.

According to the 2000 biography "Les Vies Cachees de DSK" by Vincent Giret and Veronique Le Billon, Anne Sinclair was one of France's highest-paid journalists before she gave up her job to avoid a possible conflict of interest when her husband became a government minister in 1997. The biography says Strauss-Kahn's wife is also a wealthy heiress, whose grandfather Paul Rosenberg was a prominent modern art dealer before the Second World War.

Strauss-Kahn himself makes an annual tax-free salary as head of the IMF of $420,930, plus an annual "scale of living" allowance of $75,350, according to a 2007 IMF press release. French newspapers have inventoried the couples real estate holdings, which reportedly include a six-room apartment in Paris' chic 16th arrondisement; a 240-square-meter apartment on the luxurious Place des Vosges; a home in Marrakech, and a house in Washington.