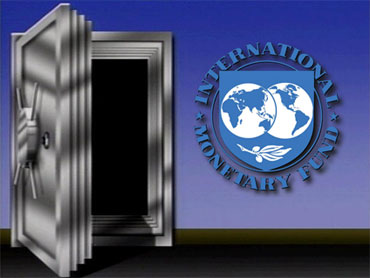 The International Monetary Fund is considering how the world's banks can pay more to help insure the financial system from another crisis and possibly assist poorer countries in the battle against climate change.

In a press briefing ahead of the upcoming annual meeting of the IMF and the World Bank, the fund's managing director Dominique Strauss-Kahn said it was only right that the financial world contributed more.

He said his deputy John Lipsky was heading a taskforce to look at what measures would be appropriate.

"Considering that the financial sector is creating a lot of systemic risks for the global economy, it is fair that the sector pay some of its resources to mitigate risks it is creating itself," he said.

However, he said he didn't back plans for a so-called Tobin tax - a flat tax on currency transactions named after the Nobel Prize laureate James Tobin. Tobin first made his proposal in the early 1970s when U.S. President Richard Nixon ended the dollar's convertibility to gold and effectively brought an end to the global currency system that had prevailed since World War II.

Tobin said the tax would help limit instability arising from a world of floating exchange rates.

"The very simple idea of putting a tax on transactions won't work for many technical reasons," said Strauss-Kahn.

The IMF was asked to come up with proposals about some sort of tax on financial firms by the leaders of the Group of 20 rich and developing countries, largely on the behest of German Chancellor Angela Merkel and French President Nicolas Sarkozy.

In an interview with the Associated Press, Lipsky agreed that the Tobin measure "seems out of date," but he accepted the general idea of deposit insurance, much like the U.S.'s Federal Deposit Insurance Corporation, which was created in 1933 during the Great Depression when banks went under and depositors lost their savings.

"We're going to be asking the question, is there a fair, equitable and efficient way to think about charging the financial system for the potential costs of insuring the system, in the way that banks typically pay for deposit insurance on their depositors," he said.

Oxfam, which has been pushing for a flat tax on currency transactions, welcomed the IMF's plan to look at the issue even though both Strauss-Kahn and Lipsky appeared to pour cold water on the Tobin tax.

"Strauss-Kahn said that it was fair to expect the banks to pay for clearing up the mess they've created," said Max Lawson, international policy advisor at Oxfam. "A financial transaction tax is the only way to do it."

Lawson said a 0.005 percent tax on currency transactions in major economies could raise $30 billion a year and that any rescue package for countries should include such a tax.
By AP Business Writer Pan Pylas