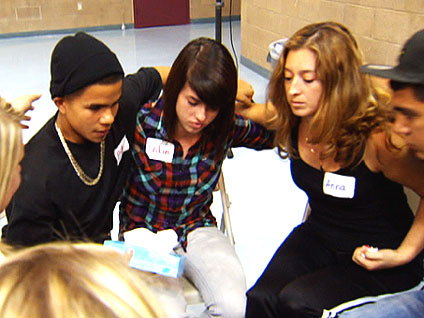 NEW YORK (CBS) Brand new MTV series "If You Really Knew Me" offers a intimate and powerful portrayal of a high school campus dealing with the familiar teenage world of cliques.

The MTV series is filmed in coordination with Challenge Day, a social program in which trained leaders visit high schools and, in one day, try to break down the emotional barriers and social "boxes" that keep students from getting to know one another.

The show hopes to make a shift in the pattern of teenage social interactions and communication. The aptly-named Freedom High School in Oakley, Calif., was one stop along the way.

"I've heard everyone always cries," one girl said before a session, then later, everyone around her did just that as the high school girl opened up with heartfelt feelings about acceptance and prejudice. Gay or straight, middle class or not, black, Asian, Latino or any other ethnic group - the show tries to challenge labels and let down people's defenses.

The show brings intimacy and an I'm-in-your-same-shoes approach to the subject of high school peer pressure. The producers make a concerted effort to focus on individual experiences of actual high schoolers and not revolve around a script or dismiss the concerns the kids have. And that should be applauded.