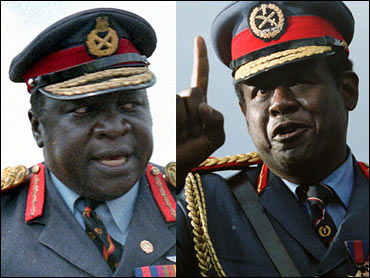 If Forest Whitaker fails to win an Oscar on Sunday for his portrayal of Idi Amin, it would be only slightly less shocking than if the late dictator was seen walking the streets here again.

But for the former tyrant's son Jaffar, Whitaker's acclaimed performance in "The Last King of Scotland" failed to capture the tall, powerful man Jaffar still describes as his "Big Daddy." The Amin family has shunned the media for more than two decades, but now that the film has returned Amin to the spotlight, Jaffar wants to offer a son's perspective.

"Dad is the only person that has ever been accused and sentenced, incarcerated by opinion, without it ever reaching any courthouse," Jaffar Amin said in an exclusive interview with The Associated Press, calling for a truth and reconciliation committee to investigate that dark period in Uganda's history.

Jaffar Amin is a 40-year-old father of five with broad shoulders, a rich baritone and a confident, animated demeanor. He bears a striking resemblance to his father and punctuates his conversation with impersonations of the late dictator.

Though he doesn't deny the atrocities committed during Amin's reign of terror, he says the film will compound many of the negative images. He also acknowledges that humanizing Idi Amin is a difficult battle — ironic given that critics say Whitaker did exactly that. ("He actually makes you feel sorry for Idi Amin," wrote the AP's Christy Lemire.)

"Dad's image cannot be changed," Jaffar sighed. "If I bring an understanding, it will be very little because he's in a compartment and getting him out of there will take a thousand years. But I believe my father would take it on the chin whatever they say about him."

Jaffar Amin has broken the family's vow of silence and says he's writing a book to counter his father's reputation as a brutal buffoon and cruel eccentric.

Rights groups estimate that up to 500,000 people disappeared under Idi Amin's eight-year regime. His secret police force was notorious for torturing and killing Ugandans they believed to be political opponents.

He is the 10th of Amin's 40 official children by seven official wives. "Father had quite an appetite for women," he said simply. "It's very African actually."

At 6-foot-1, he is also the shortest of Amin's sons. "My father was 6-foot-4, but most of his male children towered over him. He used to joke that we would make a great basketball team," Jaffar recalled with a smile.

None of the Amin family attended, but Jaffar has since watched a DVD of the film.

"A lot of the mannerisms were right. But the problem was the walk — Forest didn't get that. My father strides and his hands would go like a paddle because of his wide shoulders. Whitaker is knock-kneed — my father was bowlegged."

Jaffar Amin's main complaint, however, was the portrayal of Kay Amin, the dictator's fourth wife. Jaffar lived with her at one of Amin's official state residences, and he describes her as a second mother to him.

In the film, Kay is killed for having an affair with Dr. Garrigan, Amin's physician, who Jaffar Amin also met. Her body is mutilated in the morgue — her arms stitched to where her legs should be and vice versa.

"The most painful part for me is degrading the character of one of our blessed mothers," he said, visibly distressed. "She had a tragic death and they turned her into what she wasn't, she was a decent lady. She wouldn't have an extramarital affair the way it's claimed."

But he is vague about the circumstances of her death, describing it as a "sensitive issue."

The Amin family fled Uganda when Idi Amin was ousted by Tanzanian-backed Ugandan rebels in 1979. They lived in exile in Saudi Arabia, where many of the family remain to this day.

The family was given a huge monthly allowance that funded an opulent lifestyle; in return Amin was asked to remain silent and out of politics. It was a bargain he kept up to his death in 2003 at age 78.

Jaffar Amin returned to Uganda in 1990 and worked for a courier company. He now does voice-overs for advertisements.

"I'd ask dad, 'What happened?' He'd look at me and say, 'People fought me, I fought them but I never killed innocent people. God will be the one to judge me."'