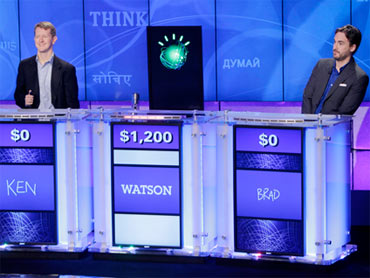 IBM's Watson supercomputer won a practice round against Jeopardy champions Ken Jennings and Brad Rutter and raised a lot of questions about the capabilities of artificial intelligence.

Watson, a four-year effort by IBM, was quicker on the draw, didn't fall prey to emotion and had a voice that could be confused for wayward computer Hal 9000 from the movie 2001: A Space Odyssey. For IBM, Watson is about tackling verticals and bringing hardware and analytics to the fore.

As one of the dozens of humans watching this practice round, I can't deny I was a bit squeamish about seeing a supercomputer wing it, adapt and show off its artificial intelligence. Is this thing going to be Skynet? That's a bit farfetched-today IBM is thinking health care will make the most use of Watson-but a supercomputer that has self-awareness and can learn gives this human pause. David Ferrucci, principal investigator of Watson DeepQA technology, said Watson can conduct self-assessments and learn.

Naturally Ferrucci was asked about whether Watson had the risk of Hal 9000. "That's science fiction," said Ferrucci. "We're not even close to that." Ferrucci, however, did add that Watson is more like the computer on Star Trek than Hal.

Here's a look at the practice rounds. Apologies in advance for the video quality.

IBM execs, Jeopardy host Alex Trebek, Rutter and Jennings fielded questions after the round. Among the key points:

- The Jeopardy questions hit Watson's chips as soon as the human retinas get the data. To take away any advantage, Watson has a mechanism to hit a signaling device, said Trebek.

- The Jeopardy champs had more concerns about Watson coming back from the future and harming them. Skynet quips were plentiful.

- Watson cannot be psyched out, which is a problem for human players. Jennings and Rutter said that it's a disadvantage to play a computer that has no emotions. Both Jeopardy champs said they were able to psych out rivals during their win streaks.

- Rutter said Watson can be a bit overwhelming. Jennings and Rutter quipped about how computer capabilities are part of human advancement, but acknowledged that they were a bit uncomfortable. Jennings said he "didn't want technology to advance that far just yet." When John Kelly III, director of IBM Research reminded Jennings and Rutter that computer and human intelligence were at an intersection point and computing would only improve, Rutter quipped: "So we're all extinct."

- I asked Rutter what it was like playing against Watson. "I'm impressed with Watson and its speed," he said. "But after 10 or 15 questions Watson is just another good player. I have every confidence that we'll do well."

- If Rutter had Watson to help as a singularity tool, the Jeopardy champ said he'd most likely to be able to better assess risks for Double Jeopardy. "Watson's biggest advantage has algorithms that can make bets instantly," said Rutter. "If I had Watson's algorithm I could make bets and assess risk."

- What's Watson's biggest weakness? Rutter said Watson's ability to understand human language and get the quips inserted by writers. "They tell me Watson can get jokes and have fun," said Rutter.

This article originally appeared on ZDNet.com