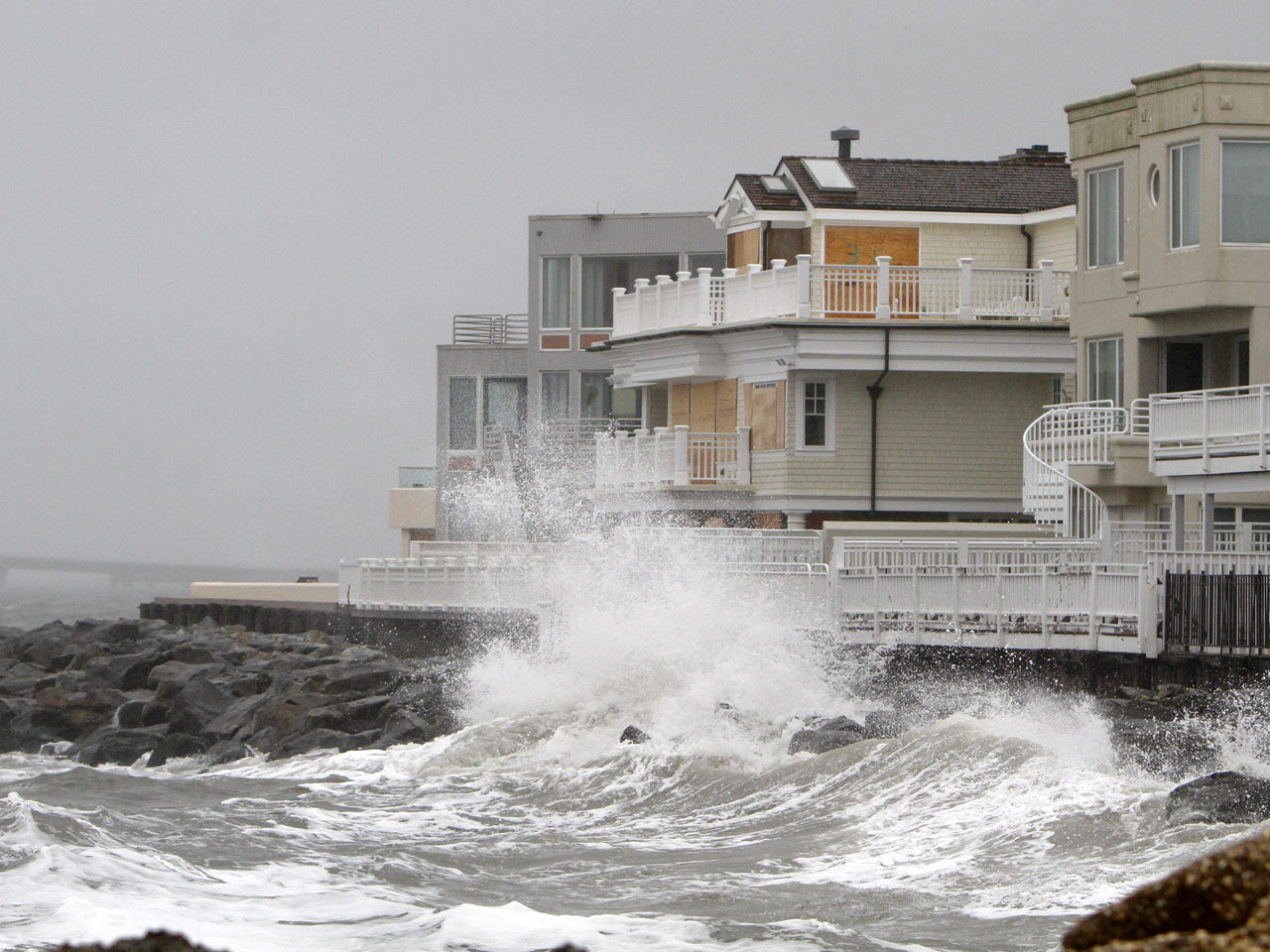 KENSINGTON, Md.As residents along the eastern seaboard brace themselves for the full impact of Hurricane Sandy, experts warn that water from storm surges will likely pose the greatest danger.

Water usually kills and does more damage than winds in hurricanes, and the National Hurricane Center has described the storm surge threat as "life-threatening."

In this case, seas will be amped up by giant waves and full-moon-powered high tides. That will combine with drenching rains, triggering inland flooding as the hurricane merges with a winter storm system that will worsen it and hold it in place for days.

Louis Uccellini, environmental prediction chief for the National Oceanic and Atmospheric Administration, told The Associated Press that given Sandy's due east-to-west track into New Jersey, that puts the worst of the storm surge just north in New York City, Long Island and northern New Jersey. "Yes, this is the worst case scenario," he said.

In a measurement of pure kinetic energy, NOAA's hurricane research division on Sunday ranked the surge and wave "destruction potential" for Sandy — just the hurricane, not the hybrid storm it will eventually become — at 5.8 on a 0 to 6 scale. The damage expected from winds will be far less, experts said. Weather Underground meteorologist Jeff Masters says that surge destruction potential number is a record and it's due to the storm's massive size.

"You have a lot of wind acting over a long distance of water for hundreds of miles" and that piles the storm surge up when it finally comes ashore, Masters said. Even though it doesn't pack much power in maximum wind speed, the tremendous size of Sandy — more than 1,000 miles across with tropical storm force winds — adds to the pummeling power when it comes ashore, he said.

The storm surge energy numbers are bigger than the deadly 2005 Hurricane Katrina, but that can be misleading. Katrina's destruction was concentrated in a small area, making it much worse, Masters said. Sandy's storm surge energy is spread over a wider area. Also, Katrina hit a city that is below sea level and had problems with levees.

National Hurricane Center Director Rick Knabb said Hurricane Sandy's size means some coastal parts of New York and New Jersey may see water rise from 6 to 11 feet from surge and waves. The rest of the coast north of Virginia can expect 4 to 8 feet of surge.

The full moon Monday will add 2 to 3 inches to the storm surge in New York, Masters said.

"If the forecasts hold true in terms of the amount of rainfall and the amount of coastal flooding, that's going to be what drives up the losses and that's what's going to hurt," said Susan Cutter, director of the hazards and vulnerability research institute at the University of South Carolina.

Cutter said she worries about coastal infrastructure, especially the New York subways, which were shutting down Sunday night.

Klaus Jacob, a Columbia University researcher who has advised the city on coastal risks, said, "We have to prepare to the extent we can, but I'm afraid that from a subway point of view, I think it's beyond sheer preparations. I do not think that there's enough emergency measures that will help prevent the subway from flooding."

Knabb said millions of people may be harmed by inland flooding.

A NOAA map of inland and coastal flood watches covers practically the entire Northeast: all of Maryland, New Jersey, Delaware, and Connecticut; most of Pennsylvania, New York, Massachusetts and Vermont, and parts of northeastern Ohio, eastern Virginia, North Carolina, and western New Hampshire.

The surge — in which water steadily increases from the ocean- will be worst in the areas north of where Sandy comes ashore.

New York will have the most intense storm surge if Sandy comes ashore anywhere in New Jersey, Uccellini said. Only if it arrives farther south, such as Delaware, will New York see a slightly, only slightly, smaller storm surge.

Already, New York City Mayor Michael Bloomberg has ordered evacuations in some of the areas most susceptible to storm surge flooding. Train and subway service in the city also is being suspended.

In general, areas to the south and west of landfall will get the heaviest of rains. Some areas of Delaware and the Maryland and Virginia peninsula will see a foot of rain over the several days the storm parks in the East, Uccellini said. The rest of the mid-Atlantic region may see closer to 4 to 8 inches, NOAA forecasts.

The good news about inland flooding is that the rivers and ground aren't as saturated as they were last year when Hurricane Irene struck, causing nearly $16 billion in damage, much of it from inland flooding in places like Vermont, Uccellini and Masters said.

The storm, which threatens roughly 50 million in the eastern third of the country, began as three systems. Two of those — an Arctic blast from the north and a normal winter storm front with a low-pressure trough- have combined. Hurricane Sandy will meld with those once it comes ashore, creating a hybrid storm with some of the nastier characteristics of a hurricane and a nor'easter, experts have said.