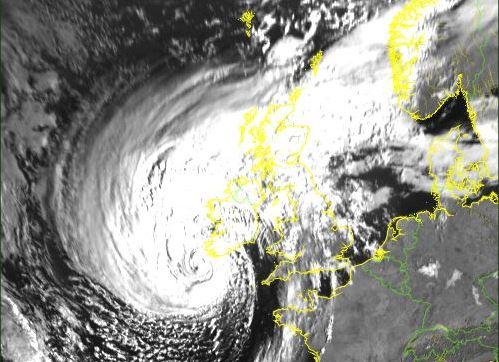 LONDON -- Authorities in Ireland closed schools, courts and government buildings on Monday as the remnants of Hurricane Ophelia slammed into the country, ripping roofs off of buildings and toppling trees.

Irish broadcaster RTE and the BBC reported Monday that Ophelia's strong winds had claimed two lives in Ireland; a woman killed when a tree fell onto a car carrying her and a second person in County Waterford, and a man who was killed while trying to clear fallen trees in County Tipperary.

Ireland's meteorological service said winds were gusting over 100 mph, sparking fears of travel chaos. Some flights were cancelled, and aviation officials warned travelers to check the latest information before going to the airport Monday.

The Irish Times reported that more than 350,000 people were without power across Ireland.

Ireland's national weather service said the strongest winds, gusting 100 miles per hour, were already buffeting the south and would "extend quickly to the rest of the country this afternoon."

"Also heavy rain and storm surges along coasts will result in flooding.There is a danger to life and property," the Met weather agency warned.

The weather service issued a "status red" warning, saying "violent and destructive" wind is forecast nationwide, and "heavy rain and storm surges along some coasts will lead to flooding."

There were 14 separate flood warnings in place in the U.K. before lunchtime on Monday.