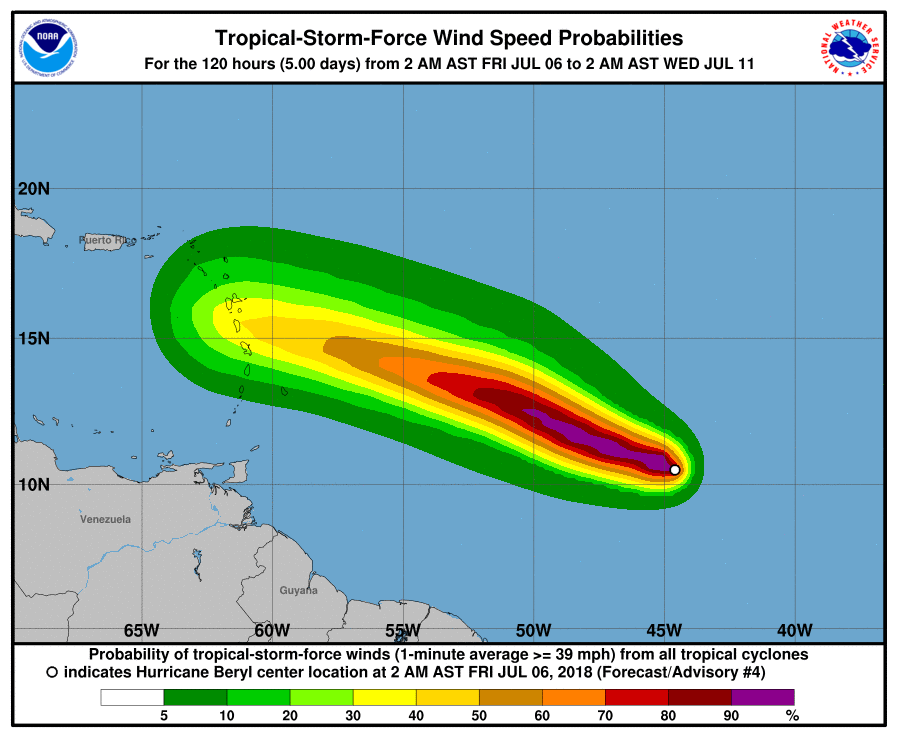 Barbados declared a hurricane watch Friday as Hurricane Beryl gathered strength in the Atlantic Ocean, the National Hurricane Center said. The storm was declared the first hurricane of the 2018 Atlantic hurricane season, and is expected to hit the eastern Caribbean as a hurricane instead of dissipating.

Some of the islands in Beryl's path have not yet fully recovered from last year's devastating storms.

The government of France has issued a tropical storm watch for Martinique, Guadeloupe, St. Martin and St. Barthelemy. The National Hurricane Center said hurricane or tropical storm conditions are possible within the watch areas Sunday or Monday.

Earlier, the National Hurricane Center had warned that Beryl will remain very difficult to predict.

"Due to its very small size, there is greater-than-usual uncertainty in the analysis of Beryl's current intensity. Confidence in the official intensity forecast is also much lower than normal," the National Hurricane Center said early Friday. "Rapid changes in intensity, both up and down, that are difficult to predict are possible during the next couple days."

After gaining strength Friday morning, Beryl was a Category 1 storm with maximum sustained winds of nearly 80 mph, according to the hurricane center. It was located 1,045 miles east-southeast of the Lesser Antilles on Friday morning and was moving west at 15 mph.

Beryl is expected to pass near Dominica and the French Caribbean islands of Guadeloupe and Martinique late Sunday or Monday. It is forecast to remain a hurricane as it passes south of Puerto Rico and not dissipate until it is located south of Haiti and the Dominican Republic.

Forecasters said the storm is expected to dump heavy rain across islands including Dominica and Puerto Rico, which could also be hit with winds of more than to 40 mph and flooding.

"People have to remain alert," Gabriel Lojero, a forecaster for the National Weather Service in San Juan, told The Associated Press. "The forecast could change for the better or worse."

Dominica was hit by Hurricane Maria last year as a Category 5 storm and hasn't fully recovered. Neither has Puerto Rico, where some 60,000 people still have a tarp as a roof and more than 1,000 customers remain without power more than nine months after the storm.

Many worry Beryl will cause power outages across Puerto Rico given the fragility of the U.S. territory's electrical grid after Maria destroyed up to 75 percent of its distribution lines. Lojero also warned that the storm is expected to dump up to four inches of rain and could unleash landslides.

"Maria caused a lot of changes in vegetation," Lojero said. "The island is vulnerable."

Officials said they will open 424 shelters across Puerto Rico as a preventive measure and urged people to monitor the storm's progress.