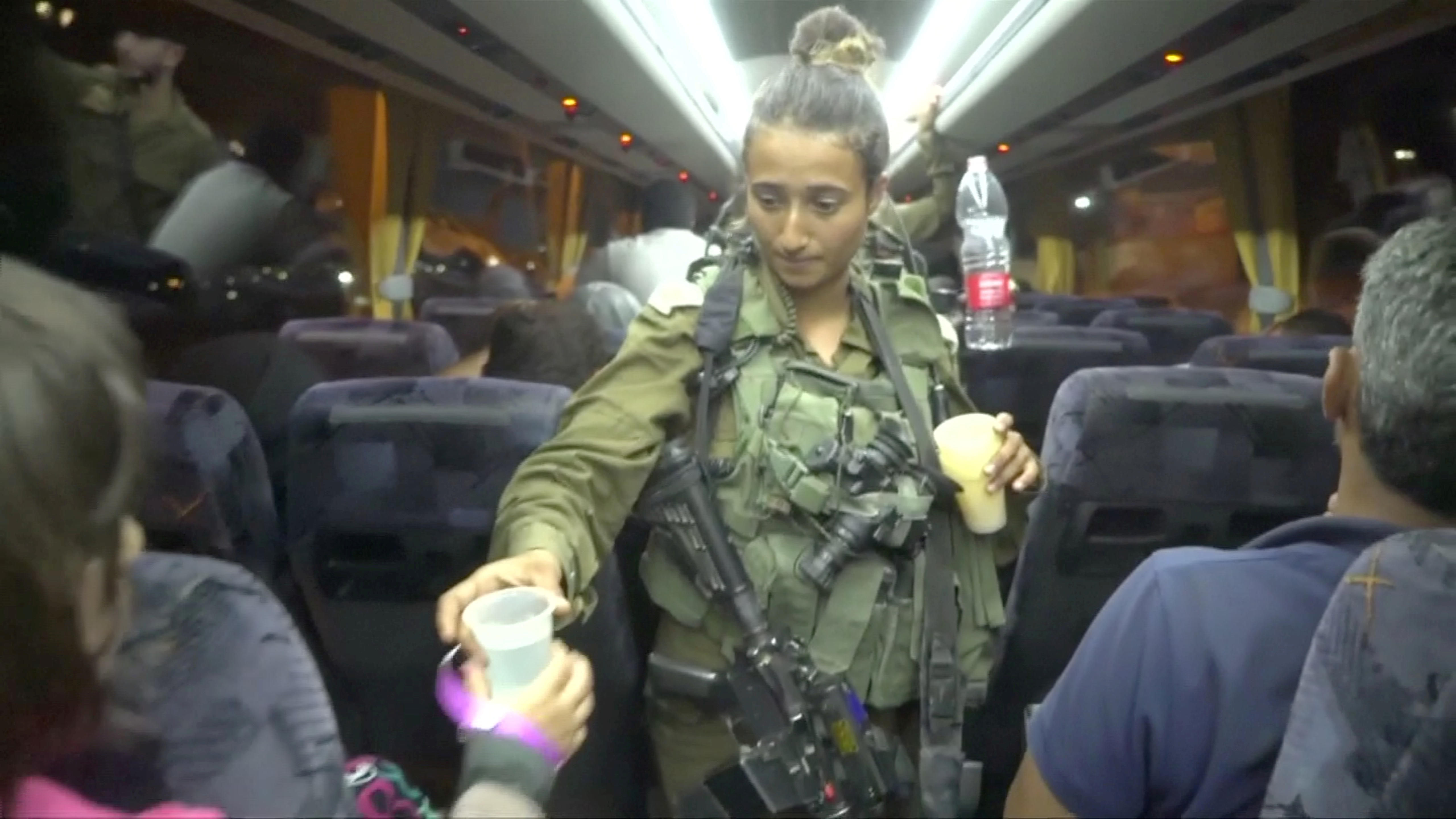 BEIRUT -- The Israeli military in coordination with its U.S. and European allies evacuated hundreds of Syrian rescue workers known as the White Helmets from near its volatile frontier with Syria, in a complex and first-of-a-kind operation. Jordanian Foreign Minister Ayman Safadi said Sunday that 422 White Helmets volunteers were evacuated, instead of the initial 800 cleared for the operation.

The evacuees, who were hemmed in from one side by advancing hostile Syrian troops and from another by militants affiliated with the Islamic State of Iraq and Syria (ISIS), were transported to Jordan, from where they are expected to be resettled in Europe and Canada in the coming weeks.

Israel's military said the overnight operation was "an exceptional humanitarian gesture" at the request of the United States and European allies due to an "immediate threat to the (Syrians) lives." It posted a video online showing its soldiers handing out water bottles to the evacuees.

"These are people who saved lives and whose lives are now in danger. I authorized bringing them through Israel to other countries as an important humanitarian gesture," Netanyahu said.

The U.S. State Department welcomed the rescue of "these brave volunteers" and cited the United Nations, Israel and Jordan for helping with the operation.

"We renew our call on the Assad regime and Russia to abide by their commitments, end the violence, and protect all Syrian civilians, including humanitarians such as the White Helmets, in areas formerly part of the southwest de-escalation zone and throughout Syria," State Department Spokesperson Heather Nauert said in a statement.

Britain said the operation was possible due to the joint diplomatic efforts, hailing the efforts of the White Helmets volunteers to save lives in opposition areas.

Jeremy Hunt, U.K's foreign secretary, called the successful evacuation "fantastic news," and thanked Israel and Jordan in a tweet for acting quickly following the request. The White Helmets, he said, "are the bravest of the brave and in a desperate situation this is at least one ray of hope."

The members of the White Helmets and their families had been stranded along the frontier with the Israeli-occupied Golan Heights following the Syrian government offensive in southwestern Syria which began in June.

Raed Saleh, head of the White Helmets, also known as the Syrian Civil Defense, said a number of volunteers and their families were evacuated from a dangerous, besieged area.

This was the first such Israeli intervention in Syria's lengthy civil war, now in its eighth year. Although it has sent aid into Syria and has provided medical treatment to thousands of Syrians who reached the Golan Heights frontier, the Israeli military said its actions did not reflect a change to Israel's non-intervention policy in Syria's war, where all the warring parties are considered hostile.

It was an unprecedented operation to provide protection and asylum to allies of Western nations in Syria's complex battlefield.

The White Helmets have enjoyed backing and received finances and training from the United States and other Western nations for years. Because of their work in opposition areas, where they were almost exclusively the only ones to offer rescue services in the face of the government military advances, they were considered public enemy number one by the Syrian government.

They offered services where state institutions and services are non-existent. Their facilities were targeted, and their volunteers hit in what became known as "double tap" attacks that drew the volunteers to areas of bombings only to hit them once on site.

On Sunday, Syrian state media kept up the campaign against the group, pointing out that Israel facilitated the evacuation, citing it as evidence that the group was collaborating with an enemy power. Syrian state TV al-Ikhbariya called the evacuation a "scandal." The State News Agency SANA said "the secret" of the group had been revealed and their "role as an agent ended."

Syrian lawmaker Khaled Abboud said that "foreign powers are pulling their agents out of the battlefield" because of the Syrian military victories that have quashed the "aggression" against Syria.

In a quick offensive, Syrian government forces, backed by Russian air forces, have been advancing from the east on areas held by the opposition in the strategic southwestern region that straddles the Jordanian border and the Golan Heights, occupied by Israel in 1967. They first seized the border with Jordan, squeezing the opposition in the center and progressively chipping away at areas the rebels held for years. For the first time since the war began in 2011, government forces regained positions along the disengagement line following a cease-fire deal with Israel in 1974.

This left the rebels and the White Helmets besieged by the government from one side, the sealed frontier with Israel, and by the group affiliated with the Islamic State group from the south.

Surrender deals were reached with the armed groups, allowing thousands to evacuate to the northern province of Idlib, where the opposition still holds sway. But one civil defense official, refusing to be identified by name for his safety, said the Russians refused to allow the White Helmets to be evacuated to the north.

The Associated Press first reported on Friday that U.S. officials were finalizing plans to evacuate several hundred Syrian civil defense workers and their families from southwest Syria as Russian-backed government forces closed in on the area along the Golan Heights frontier.

The evacuees are being assisted by the U.N. Refugee agency in Jordan pending international resettlement.

The Jordanian Foreign Ministry's spokesman, Mohammed al-Kayed, said the Syrians would remain in a closed area in Jordan for three months. Safadi, Jordan's foreign minister, said in a tweet that his government approved the evacuation after a pledge from Britain, Germany and Canada that the evacuees will be resettled in three months.

It is not clear if the White Helmets who have been previously evacuated to Idlib from other parts of Syria will receive similar treatment.

Since the offensive began, Jordan said it will not open its borders to the newly displaced Syrians. Jordan hosts at least 650,000 registered Syrian refugees, according to the U.N., but Amman says a similar number of undocumented Syrians are also in the kingdom. Some 300,000 have been displaced by the fighting, with only a few thousands opting for evacuation to Idlib, which is expected to be the target of the next government offensive.

Aron Lund, a Syria expert with the Century Foundation, said after the international community's funding and promoting the White Helmets for years, the evacuation should not be a surprise.

"It seems like simple moral math to me that when the uprising fails, they should try to get their guys out alive, with their families," he told AP in an email. "Had the international community done this much earlier and also offered safe haven to the rebel leaders they've been backing, they could have helped get irreconcilables out of the equation and reduce the amount of killing and destruction."

"All sides benefit from giving the losing team a safe exit," he said.

Separately Sunday, al-Ikhbariya TV quoted a military official as saying that a military post in the town of Masyaf in Hama province was hit by an Israeli airstrike. The area houses several defense ministry facilities.