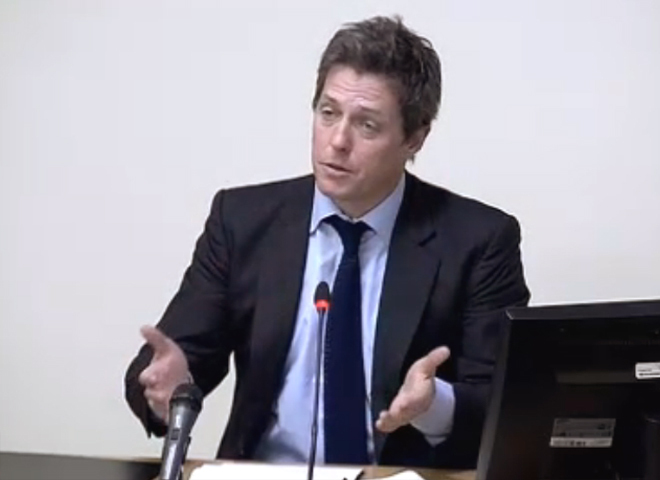 LONDON - Actor Hugh Grant said Monday that he believes his phone was hacked by Britain's Mail on Sunday tabloid — the first time he has implicated a newspaper not owned by Rupert Murdoch in the wrongdoing.

Grant told an inquiry into media ethics that a 2007 story about his romantic life could only have been obtained through eavesdropping on his voice mails.

"I cannot for the life of me think of any conceivable source for this story in the Mail on Sunday except those voice messages from my mobile phone," he said.

The tabloid published a story alleging that Grant's romance with Jemima Khan was on the rocks because of his conversations with a "plummy voiced" woman the paper identified as a film studio executive.

Grant said there was no such woman, but he did receive voice messages from the assistant of a producer friend.

"She would leave charming, joking messages ... and she had a voice that can only be described as 'plummy,'" he said.

Grant sued the newspaper for libel, and won.

Challenged as to whether he was speculating about the source of the story, Grant acknowledged that he didn't have any hard proof.

"Speculation? O.K. But ... I'd love to hear what the Daily Mail or the Sunday Mail's explanation of what that source was if it wasn't phone hacking."

He also testified about other invasions of privacy, including the publication of details of his medical records, and being chased at high speed by paparazzi.

Grant was the first celebrity to testify at the Leveson Inquiry into media ethics, created in the wake of a still-evolving scandal over phone hacking in Britain.

A judge will use all of the testimony to recommend changes in the way the media in Britain does its job.

Earlier Monday, Bob and Sally Dowler gave emotional testimony about how phone hackers at the News of the World tabloid gave them false hope - that their missing daughter was alive.

"At first we were able to leave messages - then her voicemail became full," Sally Dowler said. "It was just, I jumped - 'She picked up her voicemail, Bob! She's alive!'"

Milly Dowler was abducted and murdered in 2002. But as her parents tried to find her, the paper's investigators allegedly hacked into the 13 year old's phone in search of a scoop ... and deleted some of her messages, reports CBS News correspondent Tina Kraus.

The Rupert Murdoch-owned tabloid shut down in July after the hacking revelations were made public.

Murdoch apologized to the family and his paper paid a $3 million settlement.

Several senior executives of Murdoch's News. Corp. have resigned over the phone hacking scandal. Two top London police officers were forced to resign, and more than a dozen News of the World journalists and editors have been arrested.