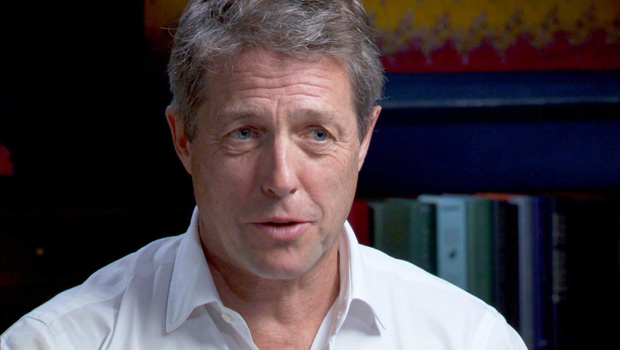 Hugh Grant is getting serious -- and not only on the SUMMER SCREEN. He talked and walked with our Tracy Smith, in London:

There are few leading men more charming than Hugh Grant ... or (by his own admission) more difficult to work with.

Smith asked, "Are you a perfectionist?"

His latest film is the true story of Florence Foster Jenkins, a tone-deaf diva who lived to sing, and St. Clair Bayfield, her loyal enabler.

So why did Grant choose to do "Florence Foster Jenkins"? "It was quite complex as a role," he said. "And it had Meryl Streep. And I thought I would be no kind of man if I didn't say yes."

Intimidated or not, he's elegant, witty and lovable ... kind of like the Hugh Grant you always thought you knew.

Born in London, young Hugh Grant dreamed of a career on the soccer field, but after graduating Oxford he was talked into trying his hand at acting.

Most of America met him in 1994's "Four Weddings and a Funeral":

At the time, Grant was still looking for his big break, and he didn't think this was it. "When the film was rough cut together," he recalled, "the producers and everyone sat together and watched the film and agreed it was the worst thing ever perpetrated in the history of cinema. There was no laughs. It was just awful. And I felt the same. And we all wanted to emigrate before the film came out."

How wrong they all were: "Four Weddings" was a hit. Grant won a Golden Globe, and a spot on the "A-List."

That "hiccup" was an arrest in Los Angeles for lewd behavior with a 25-year-old prostitute who called herself Divine Brown. It all happened just before a promotional tour for the movie "Nine Months," and the news overwhelmed every newsstand and talk show.

As Jay Leno asked Grant on "The Tonight Show," "Let me start with question number one: What the hell were you thinking?"

"I was very naughty," Grant told Smith. "I was very drunk. And yeah, it was regrettable."

"Do you think that the press covered that incident, the Divine Brown incident I guess we call it, fairly?" Smith asked.

"Yeah. It was entirely to be expected, that there would be a huge hullabaloo about that, particularly given this rather absurd persona that I had been given about who I was on the back of 'Four Weddings.'"

"People thought I was this nice character I played in that film. And so I suppose the contrast between that person and this seedy behavior was juicy stuff. And I quite understand why it was a big story."

And so, did Grant's career take a hit? "Well, no, not particularly," he said. "Because as you know, as well as anyone, Hollywood only minds about money. And that film did fine, the film that was coming out at the time. And yeah, that's all that really matters: As long as you make them money, they don't care what you get up to."

And he's made his share of money: 1999's "Notting Hill" was, at that time, the most successful British film ever to land on U.S. shores.

So, what's next for Grant? "I don't know. I'm torturing someone at the moment about a film. I like to do that for a very long time, like a cat with a half-dead mouse. And then usually, I walk away at the end and say, 'I'm not gonna do it.'"

"I find it hard to sign on the dotted line sometimes."

"Some might read into this, the fear of commitment in general. Is that fair?"

"Well, yeah, I think it is fair. But it's not just commitment. 'Permanence' scares me. I don't know why."

"Marriage, too? Does marriage scare you?"

"I have known a few good marriages, but very few," he replied. "And others look to me like they're pretty miserable. I don't really think that's a recipe for happiness."

The never-married Grant has four children from two relationships. And you might say he has another baby:

For the past five years Grant has been the public face of Hacked Off, a lobbying group founded in the wake of the British phone hacking scandal. At the group's office, they scour the tabloids looking for intrusive media coverage -- not of celebrities like him, but of ordinary people (like crime victims) who are often hounded by the British press.

He told Smith it occupies more of his time nowadays than filmmaking: "Much more. Much more."

One of his group's goals is to help shape legislation in Parliament, so Grant has spent a lot of time at the seat of government.

So, Smith asked, "Have you ever thought about running for office?"

"No, not really. There were moments in the last five years when I realized that they have quite a lot of fun. But in the end, I think it would drive you mad. I'm not sure you can achieve enough. It's all about compromise. Well, you've seen 'House of Cards'!"

Of course, he's played his share of politicians, most notably as the dancing prime minister in 2003's "Love, Actually":

"I dreaded the dance scene in 'Love Actually' more than having my teeth extracted," Grant said. "And you know, the thing is, you gotta be in the mood for dancing. You know, it takes me quite a lot of vodka before I really want to, or if I'm alone at home with no one around, I like a bit of a dance sometimes in my pants."

"When I finished my degree at Oxford I went and acted for a bit," he said. "And I was appalling. And with each part, I thought, 'Well, that's embarrassing. I'd better do one more to show people I'm not that bad.' And, in fact, instead of a taking a year, that's gone on for 35 years."

"And do you still have that feeling, 'I better do one more'?"

"Well, sometimes I think that's enough. And then there's always something that comes up."

And with Hugh Grant, it seems even the missteps can be charming.

To watch the trailer for "Florence Foster Jenkins" click on the video player below.