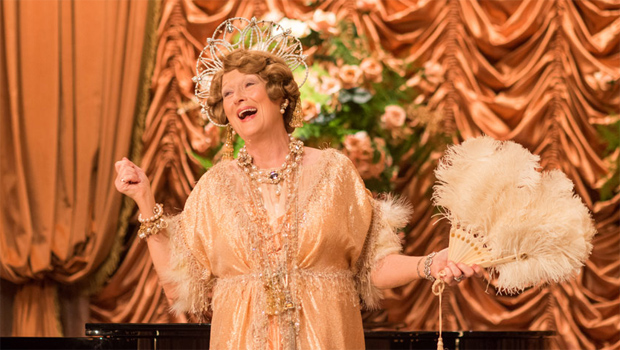 The summer screen is about to be graced by a superb actress in the role of a not-so-superb singer. The actress is Meryl Streep, and she's been talking to Anthony Mason:

Florence Foster Jenkins didn't make many recordings, but they had to be heard to be believed:

"We heard them at drama school, when I was a student," said Meryl Streep. "Yeah, it was pretty specifically great!"

Streep plays Lady Florence, as she liked to be called, in the new film, "Florence Foster Jenkins," about the amateur soprano often called the world's worst opera singer. "Most of her notes," as one critic put it, "were promissory."

Mason said, "So many of the great singers of her time are not remembered, but she is."

By the late 1930s, Florence's performances were notorious.

And astonishingly, at the peak of her notoriety in 1944, Florence took the stage at Carnegie Hall and performed to a sold-out house.

Gino Francesconi, director of the archives and Rose Museum at Carnegie Hall, says it's still one of their most-requested programs. ("I think she picked up the phone and said, 'I'm booking myself here," Francesconi said.)

To hear an original Florence Foster Jenkins recording click on the player below.

The daughter of a prominent banker from Wilkes Barre, Pennsylvania, Florence inherited a million-dollar fortune from her father. After moving to New York, she ascended society by joining dozens of women's social clubs.

Valerie Paley, chief historian of the New York Historical Society, described it as a time "when women are coming into their own in terms of empowerment, in terms of civic engagement. And all of this sort of begins in the clubs."

Paley says between the wars, New York grew to a city of five million people - 4,000 of them millionaires like Florence.

"She wasn't sort of a Harriman or an Astor or a Vanderbilt" Paley said. "I would say she was somewhere between that and the Bohemians of Greenwich Village. She had a very quirky sensibility. She certainly had great confidence in herself, which was part of her charm."

"She did an immense amount of charity work," noted documentarian Donald Collup. He says Florence also organized elaborate musical programs for her women's societies, including one she founded herself, the Verdi Club. "There was one event yearly, it was called the Bluebird Supper Dance," Collup said. "And it was just a charity to provide flowers for ill members."

A piano prodigy as a child, Florence had gone to music school in Philadelphia. As a singer, Collup said, from the beginning she was "probably less than mediocre."

Florence is believed to have contracted syphilis from her first husband -- mistakenly treated, in those days, with injections of mercury.

"It affected her hearing," Collup said. "More than likely, she had tinnitus, which is a constant hum in the head. In those days it was called 'the serenading of angels.' And it prevented her from singing in tune."

But it didn't stop her.

Mason asked Streep, "How hard a work is it to sing that badly?"

"In studying how she sang, it was not how bad she was, but how close she came to getting the note until the absolute last minutes, and then it would just, oh, fail miserably. But you were with her all the way. You thought, 'Oh, maybe this time it'll work! Maybe this time, I'll be lucky.'"

"Singing at Carnegie Hall is her dream," Bayfield said. "And I'm going to give it to her."

Was Streep nervous when she had to sing like Florence? "Oh yes. Stephen Frears, our director, I begged him to shoot the audience first, because I knew they would never hear it again the same way ... to shoot them hearing it, and so the reactions would be real. Really horrified!"

During filming, a London theatre stood in for Carnegie Hall. But Streep gave an entire performance as Lady Florence: "It's all there in the DVD extras, if you can bear it!"

Then, Collup noted, when the reviews came out, Bayfield said Jenkins was crushed: "She had not known, you see."

New York Post columnist Earl Wilson called it "one of the weirdest mass jokes New York has ever seen."

Her story offered two responses: The Earl Wilson take ("Who is she fooling? This is ridiculous"), and the opposite, as Streep expressed: "'Oh, God love her, this is fabulous. Let's let her go. What's next? What's next? Oh my God!' I think there was that."

A month and a day after her Carnegie Hall appearance, Florence Foster Jenkins died. And she might have been long been forgotten, if not for those recordings -- 78 rpm acetates, made at Melotone Studios.

"It was a vanity recording company," Collups aid. "It was originally meant for a Christmas gift for members of her club."

But they became such a cult hit, RCA bought the recordings in 1954, and they've never been out of print.

As Lady Forence herself is said to have remarked: "Some may say that I couldn't sing. But no one can say that I didn't sing."

To watch a trailer for "Florence Foster Jenkins" click on the video player below.

The artistry of Florence Foster Jenkins also inspired the recent French film "Marguerite," starring Catherine Frot. To watch a trailer click on the video player below.