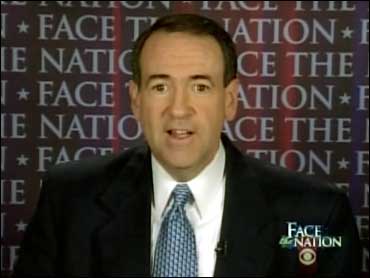 GOP presidential candidate Mitt Romney was wrong to suggest he was a lifelong hunter even though he never took out a license, campaign rival Mike Huckabee said Sunday on Face The Nation.

"I think it was a major mistake," said Huckabee, a former Arkansas governor. "It would be like me saying I've been a lifelong golfer because I played putt-putt when I was 9 years old and I rode in a golf cart a couple of times."

"I think American people are looking for authenticity," Huckabee added. "Match their record with their rhetoric."

A message left Sunday with a spokesman for Romney was not immediately returned.

Romney, a former governor of Massachusetts, was dogged last week about his hunting activities after he remarked at a campaign stop that he has been a hunter nearly all his life.

The next day, his campaign said Romney had gone hunting just twice — once as a teenager in Idaho and last year with GOP donors in Georgia. Officials in the four states where Romney has lived also told The Associated Press that he never took out a license.

Romney explained later that his staff was wrong and that he had hunted rabbits and other small animals for many years, mainly in Utah. Hunting certain small game there does not require a license.

On Sunday, Huckabee said Romney's comments undermined his credibility as a candidate.

Huckabee told Bob Schieffer, "The best thing to do is just say, 'Look, here's who I am. I support this issue, but I'm not particularly close to it."'

"I think American people are looking for authenticity," Huckabee said. "They're looking for people whose statements today match what they said five, 10, 15, 20 years ago, and match with what they've done in office, match their record with their rhetoric."

Last week in South Carolina, Giuliani defended his record favoring the use of public money for abortions. South Carolina is early voting state dominated by conservatives who oppose abortion rights.

"Now, I disagree with him. I don't think we ought to use federal tax dollars for abortion, and I wouldn't if I were president," Huckabee said.

"But I thought it was at least a statement of extraordinary honesty and candor on the part of Giuliani that he would go into South Carolina, a very pro-life environment, and just say, look, this is who I am. I'm not going to change just to get your votes," he said.