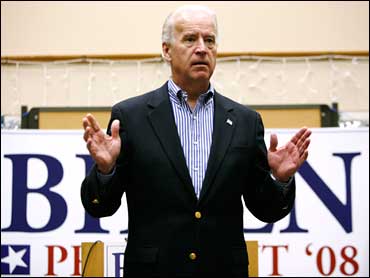 Delaware Sens. Joe Biden and Chris Dodd abandoned their bid for the Democratic presidential nomination Thursday after a poor showing in the state's caucuses.

"Tonight I am withdrawing from the presidential race but let me assure you, we are not ending this race with our heads hanging but with our heads held high," Dodd told about 100 supporters here.

"I am not going anywhere," he added, to loud cheers. "I will be fighting for the United States."

"There is nothing sad about tonight. We are so incredibly proud of you all," Biden told his supporters. "So many of you have sacrificed for me and I am so indebted to you. I feel no regret. I ain't goin' away.

"I want to thank the people of Delaware and I'll be going back to the Senate as chairman of the Senate Foreign Relations Committee," he said.

The veteran lawmaker received less than 1 percent of the vote despite a spirited campaign in which he emphasized his international policy credentials and long career in public service.

Dodd was never able to break from the pack of Democratic contenders despite his long and distinguished Senate career. He won just 0.02 percent of the state's caucus-goers. He even had taken the drastic step of moving his family to Iowa weeks before the caucuses.

"I am very, very disappointed," said Eva Bunnell, from East Haddam, Conn., who came to Iowa to volunteer for Dodd. "If the people had the opportunity to get to know him and look at his record more closely, they would see he's a great man."

It's a case of deja vu for Biden, who sought the Democratic presidential nomination 20 years ago - in 1988 - but left the race before the Iowa caucuses that year amid accusations that he had plagiarized from speeches by a British Labor Party leader.

Biden campaigned extensively in Iowa, focusing his pitch on his plans for ending the Iraq war and the broad foreign policy experience he gained from decades in the Senate. Biden also noted the many time his rivals acknowledged that they agreed with him.

His advisers had hoped for a fourth-place finish and thought even third place was possible.