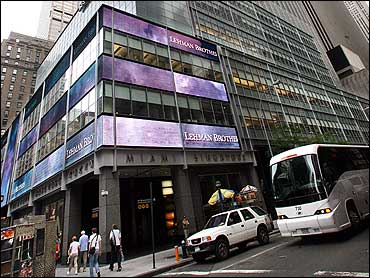 This story was written by Mike Allen.


America's banking instability could upend the final 50 days of the presidential campaign, with both candidates forced to confront a calamity that has gotten only glancing attention during the first 20 months of the race for the White House.

Red flags about the nation's economic infrastructure have been popping up at least since the collapse in March of the investment bank Bear Stearns. But neither Sen. John McCain (R-Ariz.) nor Sen. Barack Obama (D-Ill.) has talked in detail about the potential consequences for voters and the government.

Until now, the crisis seemed like a confusing Wall Street story. That all ended with the fast-moving events of Sunday, which The New York Times called "one of the most extraordinary days in Wall Street's history." A CNBC special report on Sunday night called it "a complete realignment of Wall Street."

And that was before the extraordinary 9:30 p.m. announcement by the Federal Reserve of new efforts to shore up markets.

So it's no longer an insider's game. The crisis is now at a tipping point where Wall Street will visibly affect Main Street: Home buyers, consumers and entrepreneurs will have even more trouble getting credit, slowing the nation's job machinery.

Here are four huge effects for the campaigns:

1. The candidates had hoped to put off their detailed prescriptions until they were in office, unrolling an economic agenda in conjunction with an address to the new Congress. Now, there's no way to duck it.

But at a time when the economy is the top issue on voters' minds, one of the candidates could wind up winning the neck-and-neck election by talking clearly and convincingly about the fallout and what should be done.

"This is the financial equivalent of Russia invading Georgia - an unexpected event that calls for leadership and direction," said James Rickards, senior managing director for market intelligence at Omnis Inc., a research and analysis firm based in McLean, Va.

"This is an opportunity for both candidates to go beyond their [comments on] administration action and show how they would stabilize the system on a more lasting basis." (Read Obama and McCain's statements on the crisis on Monday)

2. The new crisis crowds the candidates' agendas in the stretch run, keeping them from talking about the issues that they had planned to focus on. But the candidates are creatively trying to meld the disaster into their existing messages.

McCain aides say he plans to use the news to underscore the reform message that he began hammering at the Republican National Convention.

"This is bad news for the country and yet another sign that we need to reform Wall Street," a senior McCain official said. "The only way we can do that is by reforming Washington first. We will show McCain and Palin as the ticket who will take action on the economy and make sure the taxpayers aren't stuck with the bill."

Obama aides say he will hammer the message that the market upheaval shows that the country can't afford four more years of policies aligned with those of the current administration.

His running mate, Sen. JoeÂ Biden (D-Del.), was already scheduled to give a major speech Monday in St. Clair Shores, Mich., and is likely to get heavy coverage for his fiery elaboration on this theme.

3. Just like the markets, however, each candidate faces an enormous downside risk: Troubled times could make voters less likely to take a chance on Obama, with his shorter time in Washington. McCain could pay the price for the economic disruption on a Republican's watch, or if he looks like he doesn't have the energy and creativity to reassure a worried nation.

4. They will also be more constrained when they get to Washington, with analysts estimating that the government takeover of mortgage giants Fannie Mae and Freddie Mac is likely to cost the Treasury $100 billion to $300 billion.