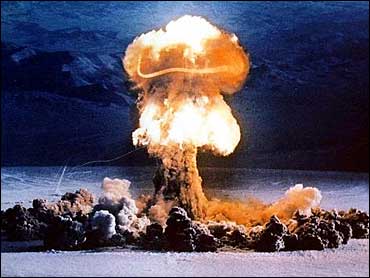 Touching on a subject most people prefer to avoid, the Obama administration is planning to educate the public about dealing with the effects of a nuclear bomb.

"We have to get past the mental block that says it's too terrible to think about," W. Craig Fugate, administrator of the Federal Emergency Management Agency, told the New York Times. "We have to be ready to deal with it."

Martin Hellman, professor emeritus of electrical engineering at Stanford and co-inventor of public key cryptography, who has been focusing on nuclear deterrence for the past 25 years, said that a baby born today, with an expected lifetime of 80 years, faces a greater than 50-50 chance that a nuclear weapon attack will occur unless the number of weapons and available weapons-grade material is radically reduced.

A nuclear attack would most likely come from a terrorist group. "Al Qaeda is especially notable for its longstanding interest in weapons of useable nuclear material and the requisite expertise that would allow it to develop a yield-producing improvised nuclear device," John Brennan, White House chief counterterrorism adviser, said in April.

Crude bombs could be made without classified knowledge, but they would have a higher probability of success if they had someone who knows how to machine uranium for bomb parts, said Matthew Bunn, an associate professor at Harvard University's John F. Kennedy School of Government and an expert on nuclear proliferation and terrorism. "They don't need an Oppenheimer," he added. J. Robert Oppenheimer was the scientific director of the Manhattan Project that developed the first nuclear weapons.

The Department of Homeland Security has published a guide, "Nuclear Detonation Preparedness: Communicating in the Immediate Aftermath," which offers the following advice:

"Shelter in place. That's the single biggest message," L.A. County health director Jonathan Fielding advised. "That's the best way to save lives and prevent radiation-related illnesses. It runs counter to your basic instinct to get away and reunite with family members. If their kids are in school or in day care, that's where they should stay," he added.

Brooke Buddemeier, Certified Health Physicist (Radiation Safety Specialist) in the Global Security directorate of Lawrence Livermore National Laboratory, studied the impact of nuclear bomb blast in six U.S. cities for the Department of Homeland Security. "You can't outrun a fallout cloud," Buddemeier said in a presentation in Los Angeles, "and fatalities from fallout are 100 percent preventable."

An estimated 285,000 people, a mile away and unsheltered from a detonation in Los Angeles, would be sick or die from radiation exposure, Buddemeier said. "Even with a poor shelter, like a wood frame house, you would save 160,000 people from significant exposure," he maintained. "If people were to find shelter in a shallow basement or a multistory apartment or commercial building, 240,000 out of that 285,000 would be saved from significant exposure. If you can get into an underground parking garage or the core of an office building, you'd have no significant exposure at all," he said.

Meanwhile, the Obama administration is trying to pass a treaty that would modestly reduce the number of nuclear arms held by Russia and U.S., who control the vast majority of nuclear material. But slowing down nuclear proliferation, and keeping nuclear material out of the hands of terrorists, doesn't appear to be getting any easier.