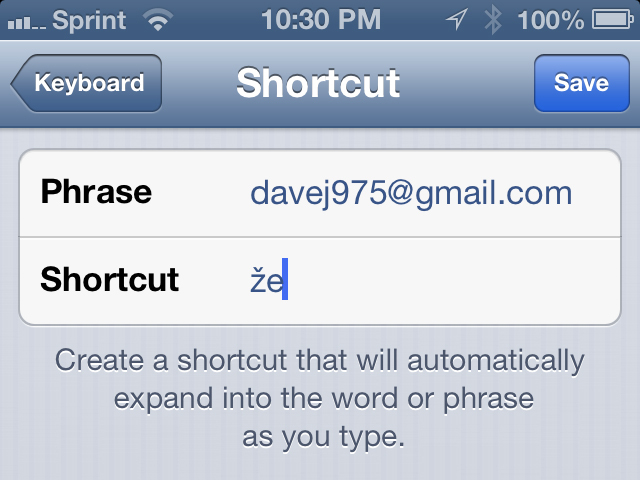 (MoneyWatch) If typing isn't much fun on a real keyboard, it's downright frustrating on an iPhone. Thankfully, it's easy to load your phone up with shortcuts that expand into larger blocks of text on command. It's the same principle as text expansion tricks in Word and Outlook, but even more essential.

You can teach your iPhone to remember strings of text that you commonly type -- your email address, phone number, short messages you tend to send a lot -- and trigger them with two or three character long shortcuts.

Ready to try this out? It's easy, but Apple hid the text shortcut feature deeply within Settings. To get there, tap Settings, General, Keyboard, and then scroll down to the Shortcuts section at the bottom of the screen. You've probably already got at least one shortcut waiting for you. To add another, tap Add New Shortcut. Type or paste the phrase that you want to type, and then enter the shortcut you want to enter to trigger it.

My advice: Use a shortcut you're unlikely to enter by accident. In Microsoft Word, I like to make shortcuts that start with an asterisk (like *p for my phone number, for example), but the asterisk is hard to get to on the iPhone. Instead, you might choose a shortcut that starts with an exclamation point (!p) or use a shortcut that is based on the alternate character set -- tap and hold the Z, for example, to choose a Z with an accent symbol. Then enter a second character to complete the shortcut.

If you do a lot of iPhone typing, you should create a number of shortcuts for all the stuff you commonly enter over and over. You'll be amazed at how much time and effort a few text shortcuts can save you.