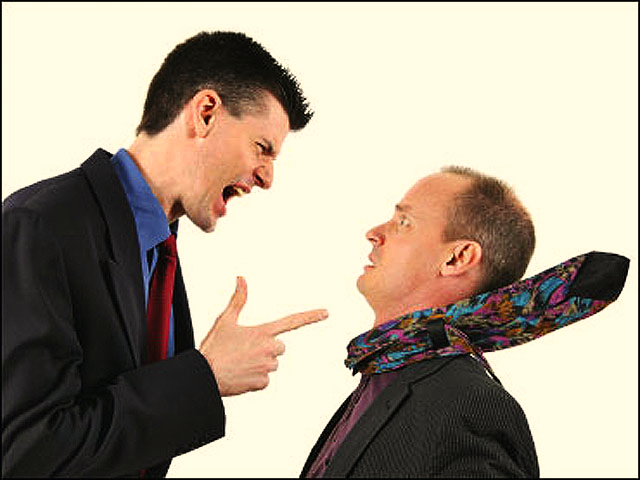 (MoneyWatch) COMMENTARY The higher you climb up the corporate ladder, the higher the stakes and the stress. Tempers run hot in the boardroom far more often than anyone likes to admit. I've seen it a hundred times. People blow up and meltdown. It's understood. It happens. More at some companies than others, but nevertheless, it happens.

Unfortunately, your peers, coworkers and employees may not be so forgiving. Workers, supervisors and managers are not necessarily afforded the same latitude as top-level executives. And companies are becoming more politically correct and less tolerant of bad behavior like angry blowups all the time.

Don't get me wrong. Nobody's saying that heated debated or constructive confrontation -- a term coined at Intel (INTC) when Andy Grove ran the show -- is bad. It's not. It's absolutely healthy in a business environment where people are engaged and passionate about the company and its product. There's a big difference between that and acting out in anger.

Take it from me; I know from experience, and lots of it. What's remarkable about this sort of thing is that most of us know how to be professional and diplomatic when we want to be; we just don't always want to be. And some of us, for whatever reason, choose the worst possible time and place to become stupid and self-destructive.

Some people are incredible to work with but tyrants to live with. They destroy their personal relationships but are remarkably successful executives. For others, it's the reverse. Some people are jerks all the time. And all of us are jerks some of the time. That's for sure.

There are three simple rules for allowing constructive confrontation and heated debate while controlling your anger and minimizing blowups at work. Follow them.

Focus on the problem, not the person

Serious business or product issues are worth getting worked up about, especially if you're the one being held accountable. But once you start angrily attacking a person, you've crossed a line into the childish tantrum realm.

The difference is huge and remarkably distinct. You might get all worked up, raise your voice and exclaim, "If we follow your plan, we're going to end up bankrupt." That's fine. But if you follow up with, "You're a moron, you know that?" not so fine.

Address interpersonal issues offline, one on one

There will always be people you don't get along with, just as certain styles and personalities clash. If it's someone you have to work with on a regular basis, do not let things linger or make believe it's not happening and will work itself out.

Not only won't it work itself out, but your negative feelings for that person will leak out. You may not notice or choose to notice, but she will and so will others. Not only that, but whatever's eating you up will build up to an eventual blowup. Happens all that time.

Call a one on one meeting and genuinely, openly say something like, "Look, I know we've had our differences, but honestly, I'm not happy about just leaving it this way and I'd like to understand your perspective so we can have a better working relationship." Then shut up and listen.

Once you put yourself in her shoes you're likely to realize that your perception of her isn't even close to reality. She'll probably realize the same thing about you. A little conflict resolution training goes a long way. If you need it, get some.

Recognize where anger comes from -- you -- and get help

You think I'm kidding? Not even a little. Look, I'll be honest with you. I wasn't always the kindest manager on the face of the earth. I was intimidating, disruptive and sometimes took things out on others. It really detracted from my abilities as an executive. And you know what? I've seen dozens and dozens of managers and executives do the same thing or worse.

Here's the thing about anger. Anger and rage, the kind that results in blowups, tirades or abusive treatment of others, is almost never about what you think it's about. And it's certainly not about whatever it is you're raving about when you see red. It comes from inside and you're misdirecting it at someone else. Recognize it for what it is and get some professional help. You'll be a much happier and more successful person.