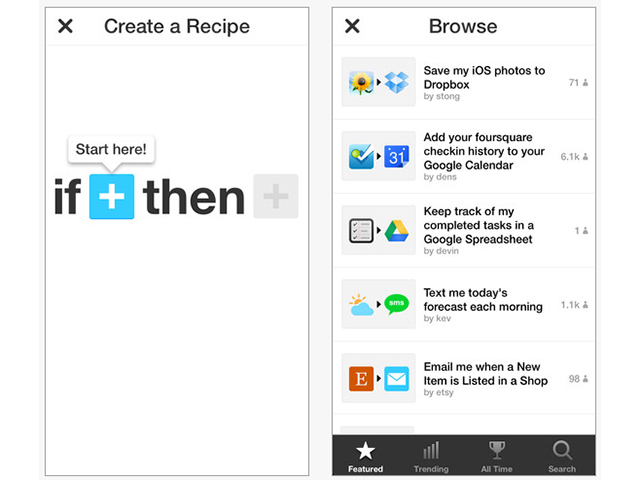 (MoneyWatch) Having a smartphone is a like owning a box of tools -- it can do a lot of things, but tools don't work by themselves. A better option: Teach your phone to do common tasks by itself, without any intervention.

That's the basic idea behind If This Then That, commonly known as IFTTT. A popular task-automation website, IFTTT lets you generate simple "recipes" that perform automated tasks in response to triggers. For example, you can use the service to text you a warning when the weather report forecasts rain, for example, or to cross-post photos that you upload to Facebook to Flickr as well. Thanks to support for a broad range of online apps and services, there's a dizzyingly wide range of things you can do with IFTTT.

What's new, though, is that you're no longer relegated to using IFTTT on the Web. Late last week, the service arrived on the iPhone as an application. Not only can you do all the stuff available on the Web, but IFTTT also comes interated with some of the iPhone's built-in apps.

For example, you can choose a recipe that automatically uploads new photos taken on the iPhone camera to a Dropbox folder, or add iOS reminders to a Google Docs document. IFTTT can even distinguish between screenshots and photos, and take different actions depending upon whether you use the front camera or the rear. It's quite powerful.

IFTTT is free and very easy to use. Every recipe follows the "if this then that" formula -- you specify the this -- the thing that triggers the rule -- and the that -- whatever the rule should do. The iPhone app makes it easy to do; you just select items from a list, like you're ordering lunch from a menu. IFTTT also syncs with the website, so if you're an existing user you still have access to everything you've already done. And if you don't quite "get" the concept, don't worry: There's a treasure trove of pre-canned recipes you can invoke and customize.

The only downside of the app is that you need to log into any services you want to invoke the first time you use them, and it's always a pain to sign into accounts on the iPhone, so you might want to do that on the Web site.

Until smartphones get smart enough to act as intelligent agents on our behalf -- Siri and Google Now, I'm looking at you to step up to the challenge -- IFTTT is the best chance we have to automate the tasks that eat up our day.