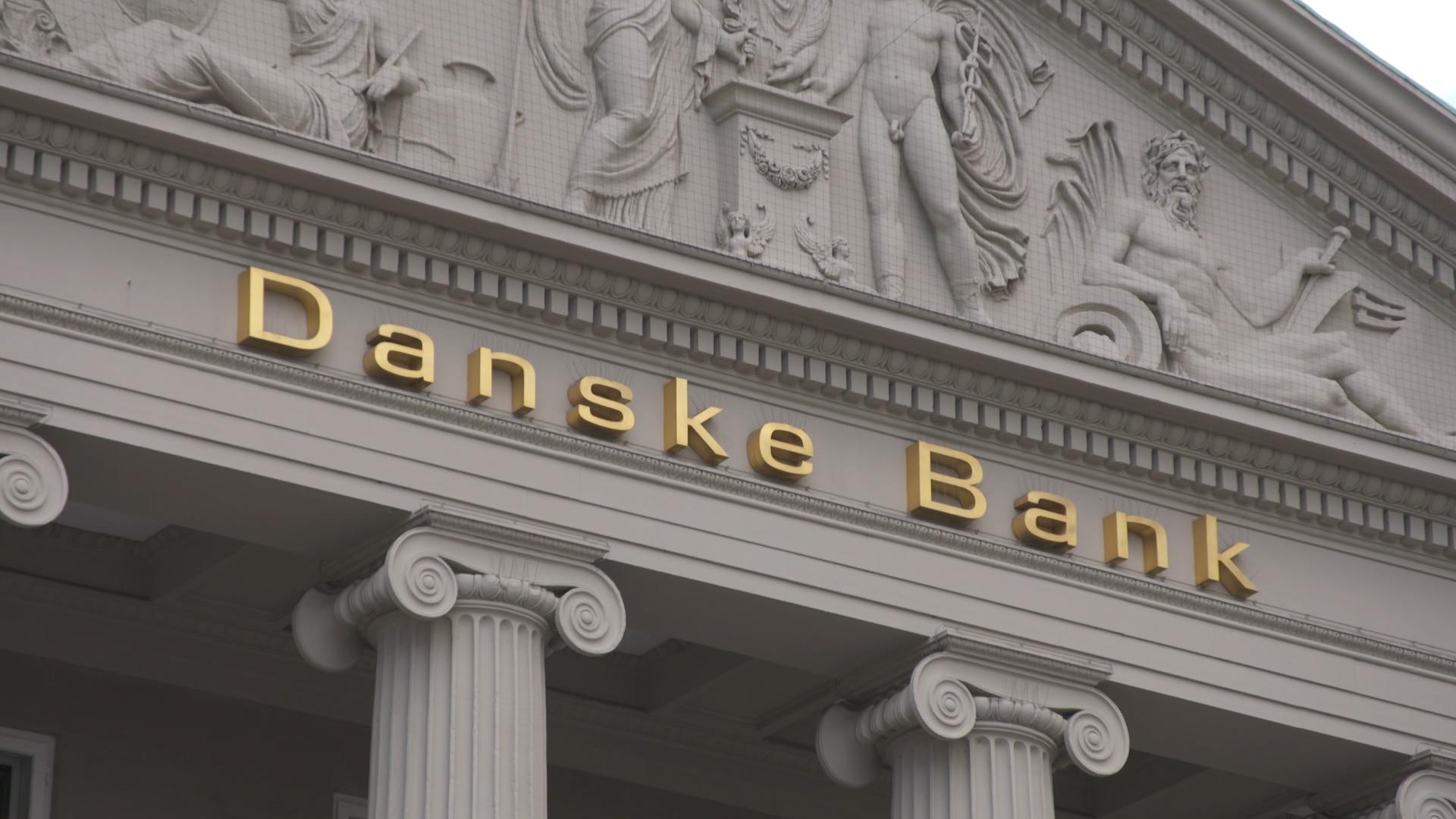 Money laundering is the way clever crooks hide and eventually spend all of the money they have stolen. And this is a tale about what's believed to be the biggest money-laundering scheme in history.

It involves nearly a quarter of a trillion dollars of very suspicious money from Russia and the former Soviet Union that was funneled into the western banking system right under the noses of major banks and regulators in the United States and Europe, who either facilitated it or turned a blind eye. At the heart of it is a whistleblower, who found one loose thread and decided to pull on it.

Howard Wilkinson is an Oxford man: cautious, prudent and a bit of a stickler. After his cover was blown last fall in a newspaper article as the person who uncovered the scandal, he has spent much of his time wandering the British countryside trying not to be found.

Howard Wilkinson: Being named as a whistleblower in a case involving dirty Russian money. It's not a good place to be.

Howard Wilkinson: You've gotta be, haven't you? The very nature of the people who want to launder money probably means that they're not the sort that you wanna go down the pub and have a pint with.

But he did sit down with us and told his tale about a financial crime so big it's hard to fathom.

Howard Wilkinson: The end number that's reported for the whole thing over the six or seven years is $230 billion of suspicious money.

Wilkinson had worked there as a mid-level executive for Danske Bank, the biggest financial institution in Denmark and one of the most respectable banks in Europe. As head of markets for the Baltics, he worked out of a branch in Tallinn, Estonia, a former Soviet republic now a NATO member right next door to the Russian bear. There were tensions but also business opportunities, and Wilkinson eventually discovered his branch's biggest business was converting Russian rubles of highly questionable origin into crisp, clean untraceable American dollars.

Howard Wilkinson: Customers would be calling up every morning. "Please, I want to sell 20 million rubles and buy dollars." We would quote them the price for that. They would get the dollars. Basically that was-- that was the large part of what we did.

Steve Kroft: And there was nothing illegal about that.

Steve Kroft: And you're saying it wasn't being done.

That's an example of British understatement. International money laundering laws require that banks know their customers, and report suspicious transactions to authorities. Yet suspicious transactions would turn out to be the vast majority of the business in the bank's non-resident portfolio, which was made up of clients from Russia, Azerbaijan and other former Soviet states.

Steve Kroft: A lot of this money came into the bank and was out the door the next day, right?

Howard Wilkinson: The next day? Oh, you think it was that slow? (LAUGH) You know, the customers would call every day. They would sell their rubles for dollars. And that would be what we would see. We didn't-- you know, what-- we didn't see where the money went.

Steve Kroft: So your business was really to execute the trades.

Steve Kroft: Not vet the clients.

Howard Wilkinson: Absolutely not to-- not to vet the clients.

That job, Wilkinson was assured, was being done by a special committee that carefully screened all international customers before they were allowed to open an account. He discovered otherwise almost by accident, when a colleague asked him to help with some paperwork on one of the bank's big customers, a British company, called Lantana Trade LLP.

Howard Wilkinson: I paid one pound, $1.30, and I got the company's financial statements. And it was a bit strange. Because it said that the company was dormant. Now, dormant means the company hasn't done a single transaction.

He knew that couldn't have been right having looked at Lantana's bank statement.

Steve Kroft: How much Lantana money was passing through the bank?

Howard Wilkinson: Up to 20 million a day.

Howard Wilkinson: It's not dormant at all.

The public documents raised other suspicions. Lantana seemed to be a British company in name only with a postal address in an unremarkable office building in North London, that it shared with at least 64 other shell companies with accounts at Danske Bank Estonia and connections to remote exotic places known for banking secrecy and money laundering.

Howard Wilkinson: So we've got a UK company with a registered office in North London with an account in an Estonian bank that's actually run by Russians and the partners, the owners, are from the Seychelles and the Marshall Islands.

To Wilkinson it screamed money laundering. He explained what he found to people at the bank who handled the Russian accounts and was told that it was a simple paperwork screw-up that would be fixed.

Thirteen months later, he heard that Lantana had been told to take its banking business elsewhere. Among the concerns was money laundering by a member of the Putin family.

Howard Wilkinson: It seemed to be Mr. Igor Putin, who's I think the cousin of the Russian president. There were links to the FSB. The FSB is, I think, the successor to the KGB. So some sort of secret police. The people running the company have been associated with several banks that had gone bust in Russia in bad circumstances.

Igor Putin, the president's first cousin, has been associated with other Russian money laundering schemes but has always professed his innocence. To Howard Wilkinson, hearing the Putin name was further confirmation that something was wrong.

Steve Kroft: What did you do then?

Concerned that others at the bank might be involved in a coverup, Wilkinson decided to look into three more of the bank's customers that were registered in Britain.

Howard Wilkinson: I paid three pounds and I took the accounts for these next three. And they were all false.

Steve Kroft: You're four for four.

Steve Kroft: Is it possible that people just could have missed this?

Steve Kroft: When you started doing all this what did people say to you at the bank?

Steve Kroft: Is it true that a high ranking executive at the bank told you, quote, "This bank is not the police, that the bank has no obligation to report false clients' accounts to the authorities?"

Frustrated with the lack of action, Wilkinson resigned and took his family back to Britain. It would take nearly five years for Danske Bank to come up with answers, after prodding from the Scandinavian and European press.

After reviewing more than 6,000 non-resident accounts, it acknowledged at a news conference last fall that its tiny Estonian branch was the gateway for what may be the largest money laundering case in history.

Steve Kroft: Do you have any idea what percentage of that money was dirty?

Howard Wilkinson: They said that almost all the customers were suspicious.

So far at least 18 former Danske Bank employees are facing charges in the case, including former CEO Thomas Borgen and his chief financial officer. The bank itself faces four counts of violating the Danish anti-money laundering act.

Stephen Kohn: Danske Bank itself admits to a complete breakdown of every single internal control. This isn't one or two mistakes. This is a mistake of their entire system, over years of which they profited immensely.

Attorney Stephen Kohn, who has been representing whistleblowers for more than 30 years, and is Howard Wilkinson's lawyer, says Danske Bank is not the only one that profited from the scheme. Most of the $230 billion passed through big New York banks undetected for years.

Steve Kroft: What does that sheer number, $230 billion, tell you?

Stephen Kohn: Well, first off, it's almost impossible to put your hands around. You're dealing with major financial institutions worldwide, who are complicit.

Steve Kroft: When you say "complicit," what do you mean?

Steve Kroft: You're saying that they should've known?

J.P. Morgan was the first to suspect that Danske Bank was laundering large amounts of Russian money through its Estonian branch and it broke off its banking relationship in 2013. Deutsche Bank USA and Bank of America carried on into 2015.

Steve Kroft: The banks aren't talking to us, but I would assume that they'll say, "Look, it's-- it's Danske Bank's job to know who its customers are. Our customer is Danske Bank. We have no reason to know all this money is flowing in-- (LAUGHTER) to Estonia from-- from Russia and--"

Stephen Kohn: Sure. Of course, they-- (LAUGH) let's just put it this way: You have to have due diligence. And you have this little bank out there in Estonia pumping in billions of dollars to you, do you think you should ask? But the proof of the pudding is that J.P. Morgan figured it out. Were they geniuses? And who did they tell? And why didn't they expose the full scheme to the United States? Why was it up to one guy in a bank in Estonia to figure it out and turn it in, risking everything? Why is it always up to the whistleblower?

Steve Kroft: What's the answer to that question?

Stephen Kohn: The banks have to do their job. And the only way they will be held fully accountable is when the United States and other governments hold them accountable and force them to implement the rules that exist to protect all of us.

All of that is being weighed right now by the U.S. Justice Department and other federal agencies which are investigating Danske Bank. It's cooperating with the investigation as are J.P. Morgan, Bank of America, and Deutsche Bank USA. None of the banks accepted our requests for interviews. The case could end up with hundreds of millions of dollars in fines and under U.S. whistleblower laws, Howard Wilkinson could potentially share in the proceeds.

Steve Kroft: I mean, you were the whistleblower in this case, correct?

Howard Wilkinson: I guess so.

Steve Kroft: Under U.S. law you could end up being rewarded with a substantial amount of money.

Howard Wilkinson: Back in December '13 the idea that this would be a case that the U.S. Department of Justice and SEC would ever have any interest in would never even cross my mind. You know, the bank should've investigated it, sorted it out. What happened? Basically nothing. It's shocking.

It's impossible to say exactly where the $230 billion of dirty money originated beyond the banks of Moscow. It's been estimated that about a third of the Russian economy is off the books, awash in cash, much of it is from corruption, bribes, and tax evasion by oligarchs, plutocrats and mafiosi. And it is impossible to tell exactly where it is hidden now beyond the shell companies, tax havens and expensive real estate in New York and London.

Steve Kroft: Do you think that there's any chance that we'll ever find out whose money it was and where it ended up?

Howard Wilkinson: It's gonna be difficult. And the fact that it's so difficult is fully the responsibility of Danske Bank. Think about walking in the snow. The snow keeps falling and the footprints are covered up, and that's where we are now in 2019. It's certainly not impossible, but it's many, many times harder. A lotta snow has fallen over the footprints.

Recruiting for talent on the autism spectrum