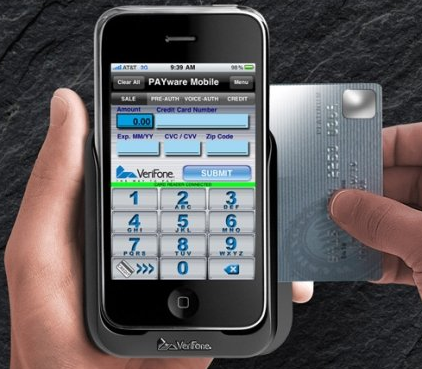 Even as Target and Neiman Marcus suffer black eyes from the massive security breaches that exposed data from millions of consumers, there’s one company whose prospects are looking brighter.

That’s VeriFone (PAY), which is a top provider of the point-of-sale devices for swiping credit or debit cards at retailers. Shares of VeriFone have surged 25 percent since Target announced the security hack on Dec. 19.

At stake is the future of payment cards in the U.S., with most Americans currently using plastic with magnetic strips. While European retailers and consumers have largely shifted to chip-based cards, called the Europay Visa Mastercard (EMV), it’s still uncommon in the U.S. But the recent security hacks may push retailers to upgrade their systems, which could lead to higher sales down the line for VeriFone.

“Europe has locked a lot of doors and windows for this activity” because of the adoption of EMV cards, Raymond James analyst Wayne Johnson told CBS MoneyWatch. In the U.S., “it’s a bull market for criminals in term of accessing payment card data because we don’t have chips on our cards.”

Johnson, who has an “outperform” rating on VeriFone, raised his target price on the stock to $37 per share after Target chief executive Gregg Steinhafel earlier this month told CNBC that he supports the EMV technology and urged retailers to adopt it.

Target, though, had a different take on the chip-based cards a decade ago, as noted by The Wall Street Journal. After working on a $40 million program to introduce the technology to its stores, Target pulled the plug because of concern from some executives that it slowed checkout speeds and didn’t provide enough marketing advantages, The Journal notes.

Target didn’t immediately respond to a request for comment from CBS MoneyWatch.

Target wasn’t alone in holding off in adopting the technology. The problem, Raymond James’ Johnson notes, is a “chicken-and-egg” issue.

That appears to be changing, with the data breaches creating an urgency for retailers to move faster on adopting chip-based point-of-sale machines. Meanwhile, Visa and MasterCard have given their issuers until October 2015 to adopt EMV.

In a way, that deadline may be providing an incentive for criminals to hack into U.S. retailers, Johnson notes. “What’s happened is that U.S. companies have rung the dinner bell. They’re saying, ‘This is the deadline and we don’t have it,’ so criminals are saying, ‘Let’s hack away.’”

Still, it’s not as if EMV technology will end all security breaches. For instance, chip-based cards wouldn’t have prevented the Target hack, which was caused by malware that reportedly infected the company’s servers.

Instead, chip-based cards protect consumers by making cards harder to clone. That’s helped tamp down fraud in Europe and other countries adopting the technology.