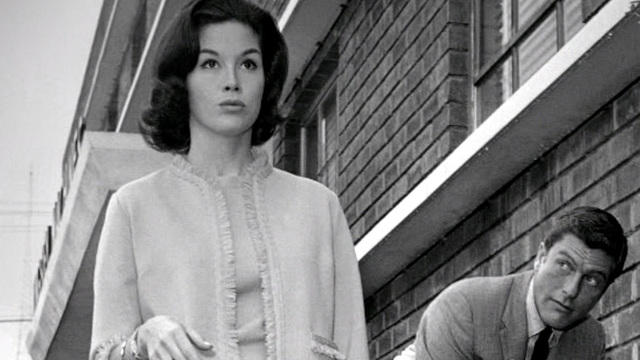 With its upbeat theme and fresh-faced stars, “The Dick Van Dyke Show” might have looked at first like any other early 1960s sitcom. But Mary Tyler Moore’s Laura Petrie, a housewife married to Dick Van Dyke’s comedy writer Rob, were actually staking out new turf.

“Rob and Laura were a modern couple. …You know that these people have sex. … It came across as a real marriage,” actor Dick Van Dyke told CBS News. “We would get into fights about who’d do the most…”

With more than a few of those standoffs ending with Laura’s trademark refrain, “Oh, Rob!”

“I think by the first ‘Oh, Rob!’ I said she’s found her character,” said Van Dyke.

“This was a great couple,” said Bill Persky, who was a writer and a producer on the show.

“They loved one another. They respected each other. And they got into all kinds of trouble,” he told CBS News correspondent Jim Axelrod.

“She was -- first of all, she was grace personified,” Reiner said. “When she and Dick did a soft-shoe to ‘You Wonderful You’ across the stage, I melted, as audiences did all over the country. She was the essence of femininity.”

But Laura certainly wore the pants in that show.

“She got in trouble with the Capri pants with the network … and we had to sleep in twin beds and we could not say the word pregnant,” Van Dyke said. “How times have changed.”

“We reflected what was going on at the time but we were very conscious of raising the issues,” said Reiner.

They took a big risk with an episode called “That’s My Boy??”

In the episode, Laura has just given birth to their child, Richie.

The hospital keeps confusing the “Petries” with the “Peters,” the couple in the next hospital room. And when the Petries come home, Rob is convinced they have the wrong baby.

He invites the Peters over to make the switch. And when Rob opens the door, an African-American couple walks in.

“It was the longest laugh I’ve ever experienced in my entire show business life. We just cut the cameras ‘cause they laughed and laughed and cheered. It was amazing,” Van Dyke recalled.

“When Carl brought the premise to the network, they said, ‘You can’t do that,” Persky explained. “Because it was right at the beginning of the Civil Rights Movement and there was a lot of unrest. …So they weren’t gonna let him do it. And Carl said that he would quit the show if they didn’t.”

Mary Tyler Moore had created the kind of wife women across America could recognize. In a country about to undergo tumultuous change, they were seeing themselves.