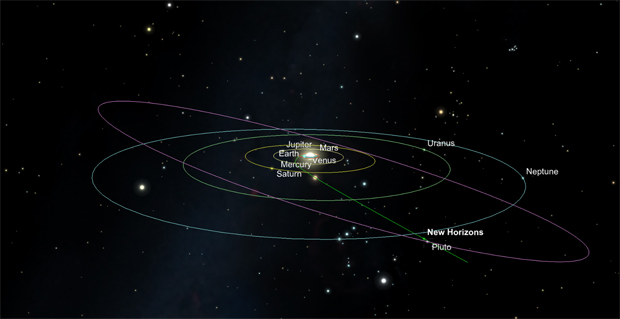 NASA's New Horizons probe, launched in January 2006, has only just gotten to Pluto after a voyage spanning some three billion miles. Leaving Earth at 36,000 mph and covering at least three quarters of a million miles per day throughout its odyssey, it has still taken the spacecraft nine and a half years to reach its target.

It is difficult to make sense of three billion miles in terms of human experience. After all, at Interstate Highway speeds, it would take a car nearly 4,900 years to cover the same distance. Put another way, three billion miles is the equivalent of flying around the Earth 120,000 times.

With the help of the San Francisco Exploratorium's on-line solar system builder, it's easy to get at least a ballpark sense of just how vast the solar system truly is and far New Horizons has traveled.

Imagine the sun the size of a quarter - one inch across - on the goal line of the Rose Bowl in Pasadena, Calif. Now imagine all of the planets stretched out in a straight line from the sun.

Earth, just 0.009 inches across at this scale, would be positioned around the three-yard line. Mighty Jupiter, just one tenth of an inch across, would be "orbiting" inside the near red zone just past the 15-yard line. Ringed Saturn would be just inside the 30. The outer gas giants, Uranus and Neptune, would be orbiting on the opponent's side of the field, 57 and 90 yards from the sun.

Pluto would be an invisible speck one thousandth-of-an-inch across 18 yards beyond the opponent's goal line. At that scale, the nearest star would be some 458 miles away.

Now let's imagine Pluto is one mile from the sun. In your driveway, draw a circle 15 inches across. That's the sun. Pace off 134 feet and drop a BB. That's Earth. Jupiter would measure a full 1.5 inches across, located some 700 feet away from your driveway and its 15-inch-wide sun.

Anonymous vs. ISIS: Who is winning social media war?

Pluto, of course, would be a full mile away, measuring just two-hundredths of an inch in diameter. Alpha Centauri, the nearest star to our solar system, would be 6,870 miles away.

Now imagine the sun in Washington, D.C. with a diameter equal to that of the Jefferson Memorial -- 165 feet. At that scale, Earth would measure 18 inches across and be located about 3.4 miles away. Jupiter would would be orbiting some 17 miles away, well within a marathoner's range.

But Pluto would be in the outskirts of Philadelphia, some 132 miles away, and Alpha Centauri would be nearly a million miles more distant.

And finally, there's the toilet paper solar system. Take a 200-sheet roll of bathroom tissue and put a dot on the first sheet to represent the sun. Earth would be five sheets away, Jupiter was be found a little more than 26 sheets out and Pluto would be 200 sheets -- 84 feet -- from the sun.

Armed with a better sense of just how far away New Horizons will be when it streaks past Pluto July 14, keep in mind its priceless pictures and other data will be beamed back to Earth with a pair of 12-watt radio transmitters. And it will take those signals, traveling at 186,000 miles per second, four hours and 25 minutes to cross the gulf to Earth.