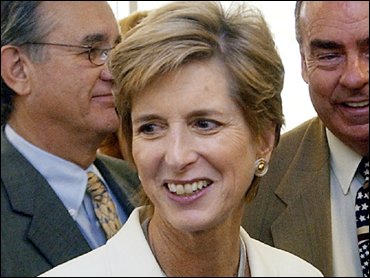 Christie Whitman, who has often been at odds with the White House over environmental issues, submitted her resignation Wednesday as administrator of the Environmental Protection Agency.

Whitman said in a letter to President Bush that she was leaving to spend time with family.

"As rewarding as the past two-and-a-half years have been for me professionally, it is time to return to my home and husband in New Jersey, which I love just as you do your home state of Texas," she wrote Mr. Bush.

With Whitman's departure, Mr. Bush loses one of the most prominent women in his administration — a moderate former New Jersey governor selected by the president to help soften his image as a political conservative, particularly on environmental issues.

Whitman had a history of clashing with the White House, starting with the president's abrupt decision to withdraw from the international global warming treaty. She had been the administration's point person in rolling back environmental protections initiated by previous administrations.

"Whitman had what many referred to as the most thankless job in the administration, and presided over some of the most controversial environmental policy in modern times," reports CBS News White House Correspondent John Roberts.

As his re-election campaign gears up, Mr. Bush's senior staff and advisers consider the next few months as optimum time to leave the government; otherwise, they will be expected to remain aboard until after the 2004 election. White House press secretary Ari Fleischer announced Monday that he will resign in July.

Mr. Bush will be under pressure to replace Whitman with a nominee who will be acceptable to his GOP supporters without alienating swing voters who tend to be wary of Republicans on the environment.

"She has had to carry out the Bush administration's anti-environmental agenda and has been at loggerheads at times with President Bush," Winona Hauter, of Public Citizen, told CBS News. "We're very concerned that someone who is even less environmentally friendly will be the new appointee."

She met with Mr. Bush at the White House on Tuesday afternoon to inform him of her decision, the agency said.

Whitman, 56, joined the administration after seven years as governor of New Jersey, where she made preservation a priority but never managed to convince environmentalists she was one of them.

Critics said that in the name of attracting businesses, she compromised water pollution protections and cut spending for state offices that prosecute environmental abuses by industry. Whitman, an avid mountain biker and skier, insisted she retained needed protections while eliminating red tape.

When the Bush administration took office, Whitman had only the briefest honeymoon. Within the first three months, she had upset industry executives and conservationists, disappointed moderates who like her and angered conservatives who don't.

The conservation group Friends of the Earth wasted little time in urging her to resign, saying that Mr. Bush's decisions on the environment had undermined her credibility. But Whitman stood steadfastly behind Mr. Bush, even when their own disagreements became public.