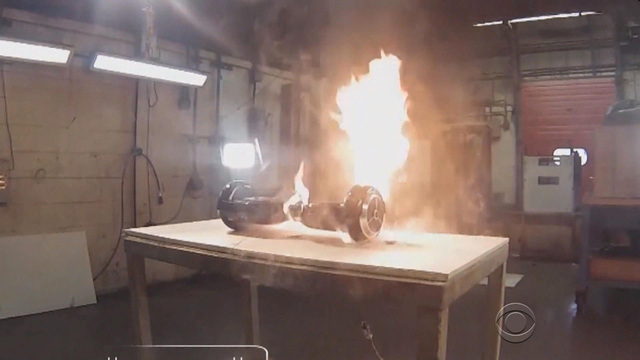 NEW YORK -- When the fire first ignited, employees at a Kentucky gas station thought it was a bomb. It turned out to be an e-cigarette that exploded in Josh Hamilton's pants. He suffered third degree burns.

It's just the latest incident involving defective lithium-ion batteries that power e-cigarettes. Evan Spahlinger, 22, had to be placed in a medically induced coma for three days after one of them blew up in his mouth.

"There's an alternative to smoking cigarettes," Spahlinger said. "It's supposed to be a safer and a healthier way of doing it."

The same battery cells that power e-cigarettes also power hoverboards. Since December, there have been 52 reported incidents involving hoverboards catching on fire.

Jay Whitacre is a professor of materials science and engineering at Carnegie Mellon University. He says the demand to make these products cheaper and more powerful has led some companies to cut corners.

"What we are seeing right now is a situation where many of these batteries are simply not made to the same standard as the batteries that are made say Sony or Panasonic, which has much more stringent quality control," Whitacre tells CBS News.

Whitacre says that lithium-ion powered items like e-cigarettes and hoverboards are considered "high power applications." If their batteries are badly designed, when they are charged, they can overheat.

"In general, with this kind of technology, it is very difficult for the user to be at fault," Whitacre says. "There is a well controlled charging circuit and there should be a good package that the cell lives in. Both of those things should be designed to protect the user."

Industry advocates say these incidents are still rare and recommend always using compatible batteries and chargers, and to avoid battery contact with metal objects such as coins, keys, or jewelry.