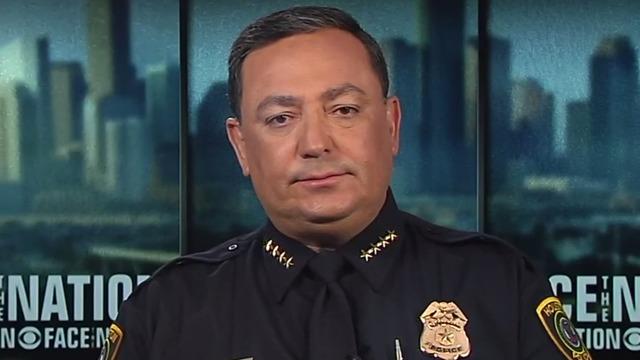 Houston Police Chief Art Acevedo slammed elected officials for inaction on the state and federal level in response to repeated shootings at schools across the country. His comments come in the wake of the latest school shooting at Santa Fe High School in Texas which left 10 people dead.

Appearing on CBS News' "Face the Nation" Sunday, Acevedo said that political leaders are failing to heed the will of the voters when it comes to gun regulations and reforms.

"Let me tell you, people at the state level and the federal level in too many places in our country are not doing anything other than offering prayers," Acevedo said. "We need to start using the ballot box and ballot initiatives to take the matters out of the hands of people that are doing nothing that are elected into the hands of the people to see that the will of the people in this country is actually carried out."

Acevedo added that "local governments are starting to make a difference" by enacting their own reforms.

"I think that the American people, gun owners -- the vast majority of which are pragmatic and actually support gun sense and gun reform in terms of keeping guns in the right hands," Acevedo said.

Acevedo posted on Facebook that he had "hit rock bottom" and "shed tears of sadness, pain and anger" over the Texas killings. The post went viral in the days after the shooting.

On Sunday, he said that one policy to consider would be stronger laws mandating proper security of guns in private homes. According to Texas Gov. Greg Abbott, the suspect used a shotgun and a .38-caliber revolver which his father owned legally. Abbott told reporters that he didn't know whether the father was aware his son had obtained the weapons.

"If you have firearms in your home and you do not secure them and you don't secure them in a manner that can preclude someone from grabbing them and taking them and carrying out this carnage, [there] is a criminal liability that attaches," Acevedo suggested.

He added, "I believe that anyone that owns a firearm that doesn't secure it properly [and it] ends up in the wrong hands and used to kill innocent people, that that should carry some significant consequences. We need to think about that on the national level across this country."