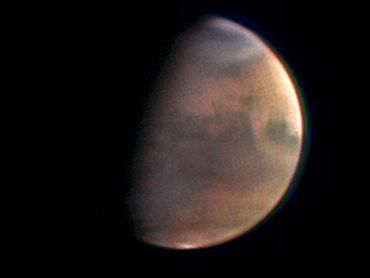 The House on Wednesday rejected a bid to shut down President Bush's plans to send man to Mars in coming decades, overcoming arguments that the idea is a waste of money in a tight budget climate.

By a 259-163 vote, lawmakers rejected a move by Rep. Barney Frank, D-Mass., to stop NASA's early stage preparatory work to send a man to Mars as the House debated a $59.8 billion measure funding the annual budgets of the departments of Justice, Commerce and State as well as NASA.

Frank contended the Mars initiative is unaffordable at a time when agencies, including NASA, are struggling with a clampdown on their budgets.

"Sending human beings to Mars ... is a luxury that this country cannot now afford," Frank said. "The justification for sending people to Mars is political. It is psychological. It is cultural. It is not scientific."

The underlying bill contains $700 million for Mars exploration, the bulk of which would go to several unmanned missions. Mr. Bush in January 2004 pledged that the United States would return humans to the moon by 2020 and ultimately launch manned flights to Mars and beyond.

"This is the United States of America. We are a nation of pioneers and explorers," said Rep. Dave Weldon, R-Fla. "We are destined to explore not just Mars but go on to other stars. It's in our nature as human beings."

Frank's amendment would not have cut NASA's overall $16.7 billion budget but would have blocked NASA from using any of it to prepare for a manned Mars mission. Critics said Frank's amendment was too loosely drafted and could have cut funds from other space exploration missions.

An effort last year to cut money for the moon and Mars mission — and transfer the money to state and local law enforcement grants — lost on a 230-196 vote.

Still to come Wednesday evening is a vote on a comparable plan by Reps. Anthony Weiner, D-N.Y., and Jim Ramstad, R-Minn., to take $476 million in funds from Mars exploration and shift it to local law enforcement grants.

Critics of the manned mission to Mars program hope for a closer vote on that amendment now that the National Aeronautics and Space Administration has lost its biggest defender and champion on Capitol Hill with the resignation of former House Majority Leader Tom DeLay, R-Texas.

The underlying bill gives Mr. Bush's moon and Mars plan full funding while grants to state and local law enforcement agencies would be cut for the sixth consecutive year.

The bill cuts Mr. Bush's request for the State Department by $378 million, about 4 percent, as part of lawmakers' moves to trim his requests for defense and foreign aid-related spending to restore Bush-proposed cuts in domestic programs.

The FBI would receive $6 billion, a 5 percent increase.