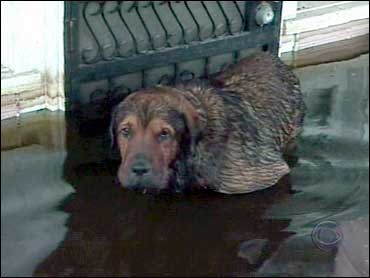 A television shot of a little boy losing his dog during rescue operations after Hurricane Katrina was the catalyst for House passage Monday of legislation to require pets to be considered in future emergency preparedness plans.

"The dog was taken away from this little boy, and to watch his face was a singularly revealing and tragic experience," said Rep. Tom Lantos of California, sponsor of the Pet Evacuation and Transportation Standards Act. "This legislation was born at that moment."

The bill, which passed 349-24, requires that state and local preparedness offices take into account pet owners, household pets and service animals when drawing up evacuation plans. Offices that fail to do so would not qualify for grants from the Federal Emergency Management Agency.

Rep. Christopher Shays, with Lantos a co-chair of the Congressional Friends of Animals Caucus, said estimates are that some 600,000 animals either died or were left without shelter as a result of Hurricane Katrina. He added that the lack of pet rescue plans also put many pet owners in danger.

"When asked to choose between abandoning their pets or their personal safety, many pet owners chose to risk their lives," he said.

The Humane Society of the United States cited a recent Zogby International poll that found that 49 percent of adults say they would refuse to evacuate if they couldn't take their pets with them.

Passage of the bill, said Humane Society president Wayne Pacelle, would ensure "that Americans will never again be forced to leave their best friends behind to face imminent danger."

In the Senate, Sens. Ted Stevens and Frank Lautenberg have introduced similar legislation, which would also give the FEMA director authority to grant funds to state and local agencies for animal preparedness projects, including the building of emergency shelters.