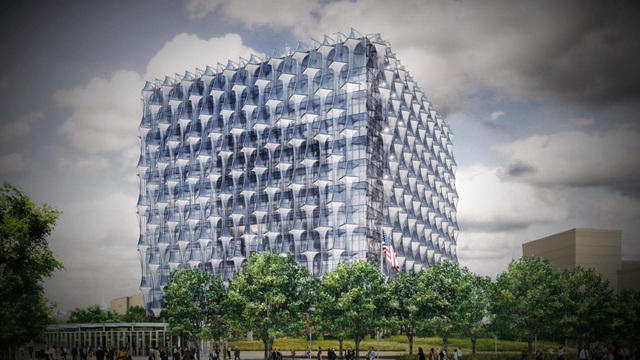 A House committee says the price of new U.S. embassies will give you sticker shock. CBS News received the draft of the new report on allegations of wasteful spending at the State Department.

The investigation was led by Utah Republican Jason Chaffetz, the chairman of House Committee on Oversight and Government Reform, who said the Obama administration took a risky approach to building embassies, taking too long and spending too much. Now, the next secretary of state will have to decide whether to build fortress-like installations or architectural jewels, reports CBS News correspondent Margaret Brennan.

According to the report, America’s striking new embassy in London comes with a sizable price tag. The facility -- a steel-framed cube surrounded by glass -- will soon exceed its more than $1 billion projection, according to Chaffetz.

“I feel very misled by the State Department because if we aren’t opening those doors in February, the cost to the U.S. taxpayer is about $100,000 a day to stay in a facility that we used to own,” Chaffetz said.

That facility – the existing U.S. embassy -- will be used to house our personnel until the new London embassy is ready. A six-month lease agreement, according to Chaffetz, accounts for a nearly $22 million cost increase.

In an email sent to CBS News following the broadcast of our report, State Department Deputy Spokesperson Mark Toner said a new embassy was required since the existing one “does not meet current security and life safety standards.” The department will not ask for additional taxpayer funds as the new facility will be entirely paid for with the proceeds from the sale of the existing embassy.

The House Oversight Committee’s two-year investigation found quibbling over a glass wall at the embassy in Indonesia cost “tens of millions of dollars in change order requests,” and nearly $3 million was spent on art at the U.S. embassy in Pakistan.

One of the biggest bills came from Mexico, where the U.S. government paid $120 million for a 15-acre lot and $56 million on the design of the diplomatic mission. But nothing has been built there yet due to environmental contamination. Chaffetz, who visited the site, said costs will climb above the more-than-$943 million estimate.

“Something has to change because they’re building them slower, they’re coming in over budget, they’re not necessarily as secure and they’re so ostentatious,” Chaffetz said.

“So for the next secretary of state, is this top of the list?” Brennan asked.

“I’m glad we have a Mr. Trump coming in because I think he’ll get it and I think he’ll know how to fix it, and fix it in a hurry,” Chaffetz said.

The State Department told CBS News it is currently requesting proposals from contractors but expects the project to remain within the congressionally approved budget. The department had tried to stop the release of the House committee report, citing concerns that sensitive information regarding U.S. diplomatic posts and personnel could be compromised.

But the strict security standards of building a post for classified diplomatic work isn’t your typical real estate project.

“Do you have any kind of timeline as to when these embassies will be both secure and finished?” Brennan asked Toner.

“All I can say is that our diplomatic security bureau, our overseas buildings and operations bureau and our management bureau work hand in hand to ensure that safety is foremost, first and foremost,” Toner said.

State Department officials said they’re mindful that what embassies look like impacts perception of the U.S. But they insist that despite the delays, all of the above projects will remain within budget.