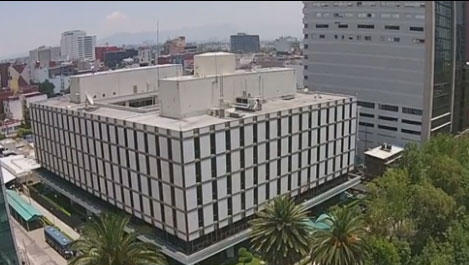 WASHINGTON -- As Congress studies ways to save money, U.S. Embassies around the world are getting a closer look. The embassy in Afghanistan is expected to cost American taxpayers nearly $900 million. And then, there's the plan to build a new embassy in Mexico.

Everyone agrees that 55-year-old U.S. Embassy in downtown Mexico City is cramped, outdated and needs to be replaced.

But finding new property in the world's fifth most populated city can be difficult.

In 2011, the State Department settled on a 15 acre plot that came with strings attached. It was the site of a Colgate Palmolive factory. And needed a full environmental cleanup before building could begin.

Utah Republican Jason Chaffetz, who chairs the House Committee on Government Reform, says the estimated construction costs have ballooned from $577 million to $763 million.

"It's a bit of a fiasco," Chaffetz said. "We hear it is going to be anywhere between 9 months and 2 years until we as the U.S. government can even start to turn the first shovel full of dirt."

In a statement, Colgate Palmolive insisted, "We have completed all remediation work at the site with the exception of a small section on the edge of the property."

The State Department's Head of Embassy Construction, Lydia Muniz, visited the site in May. She told CBS News the cost increases aren't due to delays, but to an increase in the size of the planned embassy from approximately 890 desks to 1,335 desks.

Still, Republicans argue that the Obama administration's shift away from cookie-cutter embassies towards more unique designs, like ones in London and Jakarta, costs too much and takes too long.

State Department under secretary Patrick Kennedy told CBS News last year that tailoring embassies to their location will save money over time.

"Our use of the design initiative gets us the security we need and the functionality we need at the best possible price," Kennedy said.

Once the site is clean, construction of the U.S. Embassy in Mexico is expected to take at least five years, which means that foreign service workers there won't be able to move into their new, more secure offices until at least 2020.

Illegal firearms and gun violence on the rise

Students cheer on classmate with Down syndrome