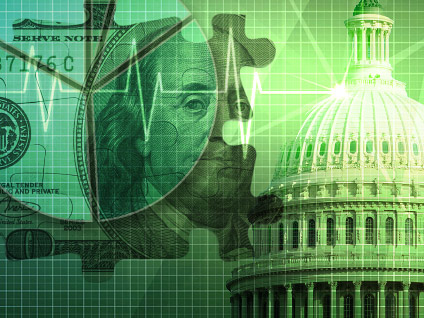 WASHINGTON – House Republicans have unveiled a stopgap bill to keep the government open past a shutdown deadline of midnight Friday.

House Appropriations Committee Chairman Rodney Frelinghuysen says the one-week measure would buy time to wrap up talks on a $1 trillion-plus catchall spending bill covering the rest of the fiscal year. It's the center of bipartisan talks on Capitol Hill. Frelinghuysen says those negotiations are going well.

The temporary bill is likely to come to a House vote Friday in the expectation the Senate would immediately send it to President Trump for his signature.

Talks on the larger spending bill have progressed in fits and starts, with the White House backing away from demands that it include money to begin construction of a wall along the U.S.-Mexico border -- though other stumbling blocks remain – including agreeing on health care funding.

On that front, the White House has assured lawmakers it will continue making payments to insurers under the Affordable Care Act, also known as Obamacare.

That's a reversal for President Trump, who had threatened to withhold the money.

Both House Minority Leader Nancy Pelosi and a senior administration official confirmed the move, which could both provide stability to the individual insurance market and remove the issue as an impediment to the larger spending measure.

The so-called cost-sharing payments help lower-income people with out-of-pocket medical expenses, but Mr. Trump had threatened to withhold them as leverage. That sparked a fierce backlash among Democrats such as Pelosi, who responded with a threat to bring down the entire, larger spending bill if the threat were carried out.