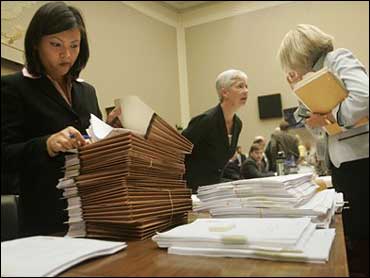 As expected, the House approved a mammoth energy plan for the nation by a wide margin Thursday. The bill, passed by a 275-156 vote, sends billions of dollars in tax breaks and subsidies to energy companies, but is expected to do little to reduce U.S. oil consumption or dampen high energy prices.

"This is a good bill for America," declared Rep. Joe Barton, R-Texas, a key author of the legislation. "It is for America's future."

Congress now awaits action by the Senate, probably on Friday.

President Bush, facing public pressure to outline a direction for the nation's energy strategy amid soaring oil prices and high gasoline costs at the pump, had called on Congress to give him an energy bill before departing for lawmakers' five-week summer recess.

The 1,725-page bill, the product of weeks of compromise between widely different versions approved by the two chambers earlier this year, would provide $14.5 billion in energy tax breaks, much of it to traditional energy companies. It also provides money for promoting renewable energy sources and new energy technologies and measures to revitalize the nuclear power industry.

The bill doubles the amount of corn-based ethanol that has to be used in gasoline, bans oil drilling in the Great Lakes and extends daylight saving time, reports CBS News Correspondent Bob Fuss.

Critics claim the bill fails to require better gas mileage from cars and sport utility vehicles and does not require conservation efforts to reduce imports of foreign oil or do anything about soaring gas prices, Fuss adds.

"It is not a perfect bill," said Rep. John Dingell, D-Mich. But he called it "a solid beginning" to diversifying future energy sources, improving the nation's aging electricity grid and fostering more energy conservation.

Opponents called the legislation a giveaway of taxpayer money to large energy companies, including wealthy oil giants reaping record profits with crude oil near $60 a barrel and gasoline averaging well over $2 a gallon.

"This bill is packed with royalty relief, tax breaks, loan guarantees for the wealthiest energy companies in America even as they are reporting the largest quarterly profits of any corporation in the history of the United States," complained Rep. Edward Markey, D-Mass.

"It is politically and morally wrong," he said.

The bill would funnel $2.7 billion in tax breaks to the oil and gas industries and provide additional support in form of royalty relief, including $500 million over 10 years for research into drilling in extremely deep areas of the Gulf of Mexico.

Energy Secretary Samuel Bodman acknowledged Wednesday there were a few items in the legislation he didn't like, such as a provision that broadens the security review of China's purchase of a U.S. energy company, a response to the recent bid by a Chinese company for California-based Unocal.

And he said it gives too much money — more than $3 billion in tax breaks and royalty relief — to oil and gas companies "that don't need incentives with oil and gas prices being what they are today."

Nevertheless, Bodman emphasized, "the president is extremely enthusiastic about this bill in its totality."

Supporters of the legislation acknowledged that it would not force down energy prices, particularly gasoline costs at the pump, nor eliminate the nation's reliance on foreign oil, much of it from volatile areas such as the Middle East.

"We're going to have imported oil in our economy for a long time," Barton, a former petroleum engineer, told reporters, responding to criticism by some Democrats that the bill, despite its expansive reach, does virtually nothing to curtail growing U.S. oil demand.

"We have yet, as a Congress, to take the politically difficult steps needed to reduce our reliance on foreign oil, improve vehicle fuel efficiency or deal with global warming," said Sen. Jeff Bingaman of New Mexico, the top Democrat on the Senate Energy and Natural Resources Committee.

Still, he added, on balance the bill "improves our energy policy and deserves to be enacted." He said he would vote for it although the House conferees rejected one of his priorities — a requirement that utilities use more renewable fuels such as wind, solar and biomass to produce electricity.

Sen. Pete Domenici, R-N.M., the chief Senate negotiator on the bill, said it provides $4.1 billion in incentives to encourage production of renewable energies, much of it to extend a tax credit for wind energy.

The legislation's tax breaks affect virtually every energy industry: $2.7 billion for oil and gas, $3.1 billion for electric utilities, $2.9 billion for the coal industry.

Barton noted the tax breaks are spread over 10 years and most are earmarked for helping industry extract oil and gas from hard-to-get places such as extremely deep areas of the Gulf of Mexico.

A huge beneficiary is the nuclear industry, which under the bill gets loan guarantees for new power reactors as well as "risk insurance" of up to $500 million for the first two reactors and $250 million for the next four in case problems arise in permitting or regulatory approval.

The bill also calls for a monthlong extension of daylight-saving time to save energy and a tax credit for those who buy gas-electric hybrid cars.

And tucked away deep in the legislation is an authorization for $10 million to promote riding bicycles to work as a way to save energy. It would still be subject to Congress actually appropriating the money.

A cornerstone of the bill, with wide bipartisan support, is a provision that would double the use of corn-based ethanol in gasoline and also spur research into developing ethanol from sources other than corn.

"For the first time the cost of the conservation and efficiency tax incentives ($1.3 billion) exceed the incentives for domestic oil production," argued Domenici.

But the government subsidies for energy industries, including oil companies, have prompted criticism from some lawmakers and from outside groups.

"The bill is larded with subsidies, tax preferences and miscellaneous handouts to an energy industry that with prices this high are in no need of taxpayer assistance," said Jerry Taylor, director of natural resource studies at the Cato Institute, a think tank that focuses on free-market policies.