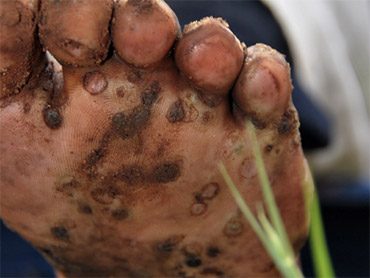 A disease whose progression and symptoms seem straight out of a horror movie but which can be treated has killed at least 20 Ugandans and sickened more than 20,000 in just two months.

Jiggers, small insects which look like fleas, are the culprits in the epidemic which causes parts of the body to rot. They often enter through the feet. Once inside a person's body, they suck the blood, grow and breed, multiplying by the hundreds. Affected body parts - buttocks, lips, even eyelids - rot away.

James Kakooza, Uganda's minister of state for primary health care, said jiggers can easily kill young children by sucking their blood and can cause early deaths in grown-ups who have other diseases. Most of those infected, especially the elderly, cannot walk or work.

"It is an epidemic which we are fighting against and I am sure over time we will eradicate the jiggers," Kakooza said.

The insects breed in dirty, dusty places. The medical name for the parasitic disease is tungiasis, which is caused by the female sand fly burrowing into the skin. It exists in parts of Latin America and the Caribbean, besides sub-Saharan Africa.

Kakooza said health workers are telling residents of the 12 affected districts in Uganda that jiggers thrive amid poor hygienic conditions.

"We are also telling them to use medicated soap. They can apply petrol and paraffin in places infested by jiggers and they die," Kakooza said.

The most affected part of Uganda is the Busoga region in the east, 90 miles from Kampala, Uganda's capital. Some cases have been reported in the central region, less that 43 miles from the city, which has led to fears the whole country might be affected.

Some think jiggers - whose scientific name is Tunga penetrans - were brought to Uganda and other east African countries by migrants from India who constructed the railway from Mombasa, the Kenyan seaport, to Kampala in the 19th century. Others say they came to Africa aboard a British ship that sailed from Brazil.

Over time locals were affected. One observer near the turn of the century called jiggers "the most fearful calamity that has ever afflicted the East African peoples" after seeing affected people on the slopes of Mount Kilimanjaro crawling around on all fours and groaning with pain. Colonial governments brought it under control but jiggers have since re-emerged where hygiene is poor.

Some affected people in rural Uganda, like Dakaba Kaala, think they are bewitched and simply wait to die instead of trying to remove the insects.

"For the last three years I have been suffering from jiggers," the 60-year-old said. "I lost two children killed by jiggers.They were sent to me by my neighbor who wants to grab my piece of land."

"It is common to find graves of whole families wiped away by jiggers," said Simon Wanjala, a ministry of health official in eastern Uganda,

Uganda's government has allocated 1 million US dollars to fight the epidemic. Treatment involves removal of the insect or topical medication.

A study a few years ago in Nigeria concluded that raising pigs, having sand or clay floors inside the home and having a resting place outside the house increased the risk of getting jiggers. Wearing closed shoes and using insecticides indoors helps prevent infestations.