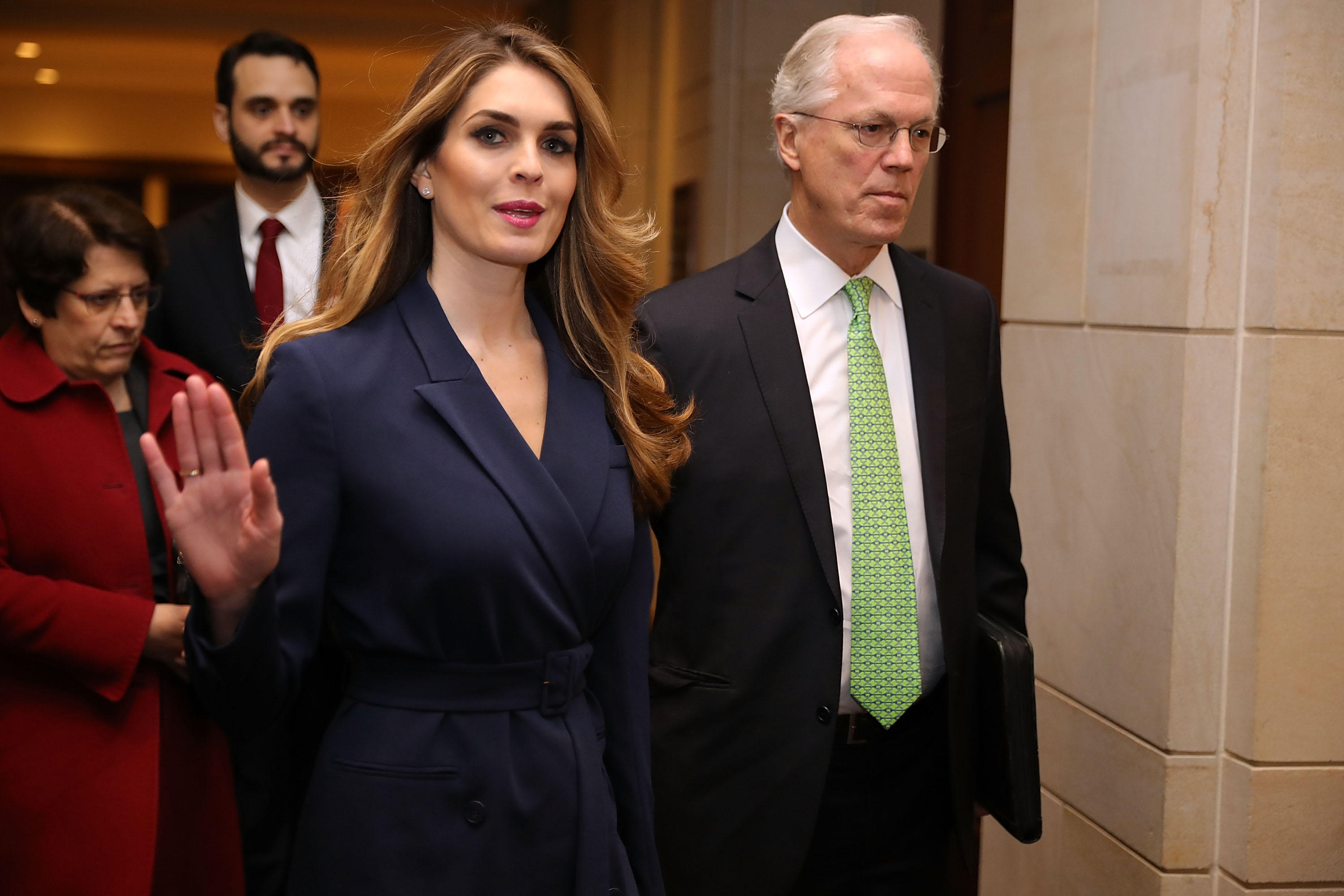 White House communications director Hope Hicks spent nine hours testifying Tuesday behind closed doors before the House Intelligence Committee, a month after her initial appearance was abruptly postponed. Like at least two other witnesses before her -- including former Trump campaign manager Corey Lewandowski and former White House chief strategist Steve Bannon -- Hicks initially relegated her testimony solely to events that took place during the campaign and refused to answer questions related to the transition or her time in the White House.

Later in the afternoon, after it was revealed she had addressed some transition matters in an earlier, separate interview with the Senate Intelligence Committee, Hicks slightly broadened her testimony to answer "some" questions related to the transition, members said.

In remarks at the conclusion of the committee's interview, ranking member Adam Schiff, D-California, said Hicks' refusal to answer questions constituted "a breathtakingly broad claim of privilege that I don't think any court would sustain, and I think the White House knows that."

"This is not executive privilege, this is executive stonewalling," he said.

Schiff said all of the committee's questions related to the drafting of a statement about the June 2016 Trump Tower meeting "went unanswered," and that he believed Hicks' responses to them should be compelled by subpoena.

He said the minority moved, as it did in Bannon's case, to subpoena some of Hicks' testimony "on the spot," but that the majority declined to do so.

Earlier in the day, Rep. Denny Heck, D-Washington, summed up the testimony in three words: "We got Bannoned."

Republicans expressed few reservations about what questions Hicks did not answer.

"I think she's been here for the last eight hours and she's answered questions for those eight hours based on the four parameters that our committee has laid out," said Rep. Tom Rooney, R-Florida, "and I think that she's been forthright and open to all the questions that we've had."

A source familiar with Hicks' testimony tells CBS News she did answer a question about whether she had ever lied for Mr. Trump by saying she has told "white lies" for him at times. The New York Times was first to report the details of Hicks' response. The source confirmed Hicks also said she never lied about anything material to the ongoing Russia investigation.

Bannon's refusal to answer the committee's questions beyond a list of 25 questions that was "literally scripted" by the White House, according to earlier remarks by Schiff, prompted a call by committee Republicans and Democrats alike to hold Bannon in contempt of Congress.

That possibility did not arise in the aftermath of Lewandowski's testimony, during which he said he was not prepared to answer questions beyond the campaign. It is even less clear that it will be considered in Hicks' case.

"We'll cross that Rubicon when we get to it," said the Republican leading the Russia probe, Rep. Mike Conaway, R-Texas, who also said he had not yet spoken to House Speaker Paul Ryan about initiating contempt proceedings for Bannon.

It was not immediately clear what next steps the committee as a whole was prepared to take in its ongoing investigation into Russia's interference in the 2016 election.

In order to bring the investigation to a credible close, Schiff said, the minority wanted to review more documents and bring in -- or, as in the cases of Hicks, Bannon and Lewandowski -- bring back more witnesses. Meanwhile, Republicans expressed an eagerness to wrap the matter up soon.

Asked what steps the majority intended to take next in the investigation, Rep. Rooney said, "Hopefully that we write a report based on the year-long investigation that we've done with the scores of witnesses that we've interviewed over the last year."

But when asked if that meant the investigation would soon be brought to a close, Rooney said, "I hope so -- but I doubt it."